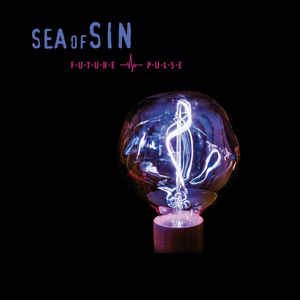 Background/Info: Klaus Schill and Frank Zwicker are active as Sea Of Sin since the 90s. The German electro-pop formation released a noticeable debut-album  “Watch Out” (1995) on Subtronic Records. Sea Of Sin stopped their activities during the early millennium, but resurrected last year with the EP “Twilight”. This EP featured 5 re-edited songs from their debut work plus a new cut. “Future Pulse” featured the same songs as on “Twilight” plus 5 more re-edited tracks from “Watch Out”.

Content: “Future Pulse” is the ultimate opportunity to (re)discover Sea Of Sin. I’m sure younger fans will never have heard of the band, but if they’re into electro-pop music, this is a work that will catch their attention.

This is pure nostalgia and ‘classical’ electro-pop music. This is the kind of production that will remind you of De/Vision and co. It’s filled with melancholic reverie, but still a few more danceable cuts. The song “I Live My Life” might be considered as the band’s anthem while “Last Day In Paradise” is the right song to dream away on.

+ + + : This album doesn’t innovate at all, but is just a way to recover Sea Of Sin and the “Watch Out”-album from dust. The songs have been reworked remaining pretty credible. I don’t want to make comparisons, but I personally prefer this re-edited album instead of the last De/Vision opus. It’s classical electro-pop music carried by strong choruses, nice and catchy sound treatments and captivating vocal parts. “Afterworld” is more club-minded and definitely a nice surprise.

– – – : I can’t say this is a totally new release, but probably the right way to get the band back in the picture. It remains stereo-typical electro-pop music like we’ve heard hundred times before, but I personally prefer an old-styled album instead of an original work leaving me skeptical and unmoved. The new song “Star” is not exactly the most successful one from the album.

Conclusion: I really hope this “Future Pulse” will give this band a push and especially inspiration to work on new songs and release a totally new full length.