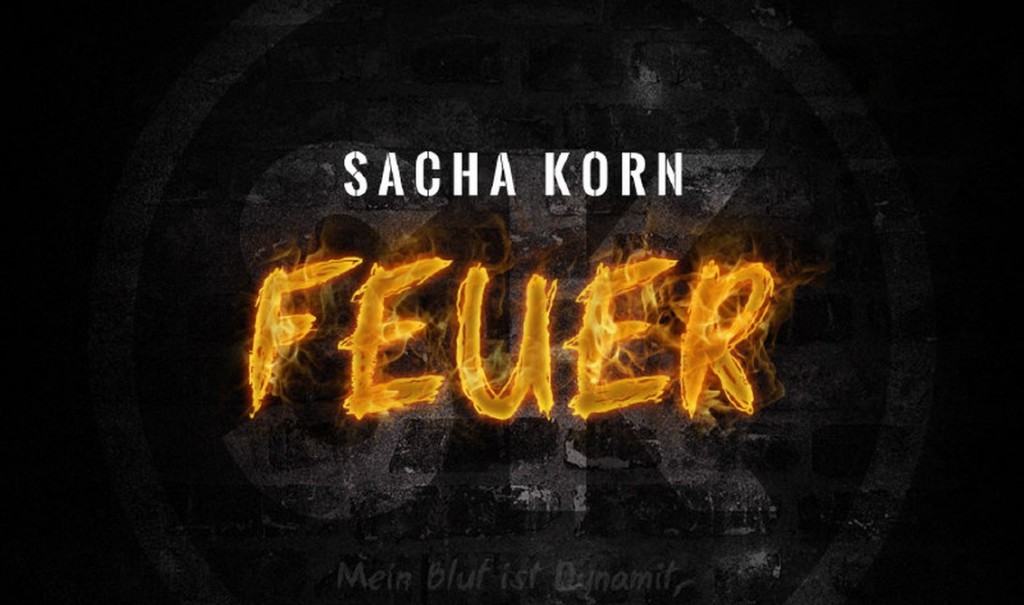 The Neue Deutsche Härte / dark metal act Sacha Korn returns with “Feuer” in January. Out now is already a video for the title track “Feuer”, you can watch it below. The album is available now from the Sacha Korn Bandcamp page both on CD and as download (including an immediate download of the track “Feuer”).

The “Feuer” album holds 9 tracks and comes 2 years after the release of “Funkenflug” and musically you can expect heavy guitar riffs mixed with melancholic melodies. The band recorded the album in Stockholm at Fascination Street Studios together with Jens Bogren, a record producer who has worked on albums by Paradise Lost, Amon Amarth, Dragonforce, The Ocean, Haken, and so on. Another part of the album was recorded in Berlin.

Lyrically, the album handles the current situation in Europe. Sacha Korn: “Lyrically it tackles the current identity crisis Europe is going through with a patriotic non-political correct touch to it. Patriotism has for years received a negative connotation in the European music world. But with the current immigration crisis and the recent terroristic attacks in Paris, France, being a patriot is no longer a filthy word, but something to be proud of as it stands for Western values which are more and more under threat. Being proud of the values of the real Europe is now more than ever the correct stance to take. This is not about religion, this is about our values which everyone willing to live in Europe should embrace.”

For those looking to discredit the musician (and there are many), know that Korn’s credits for instance include guest speaker appearances at music conferences in China and consultancy work for Afro-American 80ies super star Terence Trent D’Arby. Terence Trent D’Arby’s brother Daren D’Arby actually delivered vocals on several tracks on “Feuer”.

Since you’re here … … we have a small favour to ask. More people are reading Side-Line Magazine than ever but advertising revenues across the media are falling fast. And unlike many news organisations, we haven’t put up a paywall – we want to keep our journalism as open as we can. So you can see why we need to ask for your help. Side-Line’s independent journalism takes a lot of time, money and hard work to produce. But we do it because we want to push the artists we like and who are equally fighting to survive. If everyone who reads our reporting, who likes it, helps fund it, our future would be much more secure. For as little as 5 US$, you can support Side-Line Magazine – and it only takes a minute. Thank you. The donations are safely powered by Paypal.
Tags: Sacha Korn