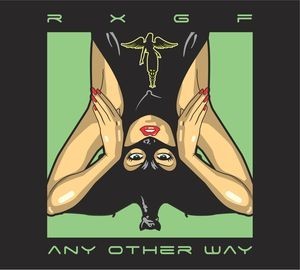 Content: I never heard of RxGF before, but I can assure you this album is one I’ll keep in mind. Based in Seattle (USA) RxGF was been set up by John Morgan Reilly and Jonathan Plum and are joined by vocalist Angeline Schaaf.

It’s not that easy to define the sound of this band as they’re mixing different styles, composing a refreshing sound, which seems to get inspired by pop, rock, new-wave, trip-pop and a few other genres for the ride. I would say in the end it all sounds like pure crossover.

“Any Other Way” is the opening song revealing the great and sensual vocals of Angeline Schaaf and a real particular music featuring real drum parts and electronics. The songs also feature guitar parts adding an extra rock and new-wave touch to the work. The electronic side is however more present creating the basis of this work. It however resulted in a passionate and an electro-rock minded song like “We Will Not Be Denied.” The vocals have this magic and bewitching touch while the music is refined by great electronic treats.

Angeline Schaaf is not only adding a warm and sensual flavor to the work –some passages reminding me of Dana Del Ray, but she also performs in a charismatic way. She definitely is one of the main elements of RxGF splendor. In addition, the music has this original and refreshing touch, which dares to explore new paths and this way innovating. RxGF cannot be considered as part of a particular genre, it simply is the offspring of different genres.

The electronic exploration visits and especially revisits trip-pop fields (cf. “Never Felt So Good” and “Things That Go bang – False Flag Mix”) while “The Dying Grace Of Machines” reveals a harder approach mixing electronic passion and creativity leading to a kind of ‘nu-EBM’. But the next song (cf. “The Hit”) already sounds different, revealing a moody side while this opus ends with the dreamy-like “Belladonna Dream – Verax Mix.”

Conclusion: RxGF is a fascinating band which took me by surprise delivering a truly artistic cocktail mixing creativity, the passion of sounds and subtlety in writing plus a captivating vocalist. This album makes us appeal for more…

Best songs: “We Will Not Be Denied”, “Flesh And Bone”, “The Dying Grace Of Machines”, “Things That Go bang – False Flag Mix”, Any Other Way”.

Since you’re here … … we have a small favour to ask. More people are reading Side-Line Magazine than ever but advertising revenues across the media are falling fast. And unlike many news organisations, we haven’t put up a paywall – we want to keep our journalism as open as we can. So you can see why we need to ask for your help. Side-Line’s independent journalism takes a lot of time, money and hard work to produce. But we do it because we want to push the artists we like and who are equally fighting to survive. If everyone who reads our reporting, who likes it, helps fund it, our future would be much more secure. For as little as 5 US$, you can support Side-Line Magazine – and it only takes a minute. Thank you. The donations are safely powered by Paypal.
Tags: RxGF