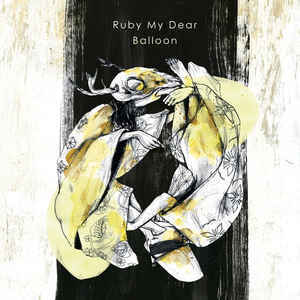 Background/Info: French project Ruby My Dear is back on track joining hands with Kaometry Records. After 2 albums released on Ad Noiseam and multiple EP’s released on labels like Acroplane, Peace Off, Braincore, Illphabetik… they now signed to another company to unleash this 4-track 12”.

Content: Ruby My Dear clearly avoids any cliché format by simply moving on their exploration of different sonic fields. “Balloon” is a quite appropriated title and eventually a sonic metaphor for a band travelling through music genres like d’n’b, breakcore, experimental, hardcore.

There’s a constant mix of influences and a switch from fast rhythmic patterns towards wafting passages accomplished with subtle, little bleeps. “Balloon” is an imaginary anarchy of noises, which creates this experimental touch. The real cement between all the influences remains the breakcore basis.

The songs also reveal a few vocal parts, which have been produced in a fragmented way and spoken like. It’s more like an extra input instead of real vocal lines.

+ + + : I like the kind of ‘noise anarchy’ I was referring to. Ruby My Dear avoids established music standards, and creates their very own sound.

– – – : “Balloon” is not exactly what I would call an ‘accessible’ release for a wider audience so it might be too ‘difficult’ and experimental for the masses.

Conclusion: Ruby My Dear is the kind of formation you can define with endless adjectives and especially when it comes to describing their sound. “Balloon” simply stands for avant-garde music and a solid antidote to clean and established music genres.