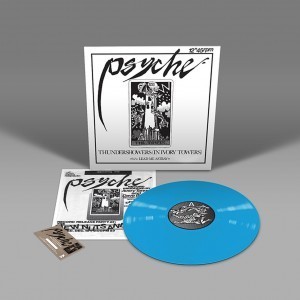 Out via Artoffact Records on September 25 is the 30th anniversary reissue of Psyche’s first 12″ release, “Thundershowers (In Ivory Towers)”. This independently released 12″ helped launch Psyche’s career in Canada. Artoffact Records presents a reissue which comes in a replica sleeve and with full audio remastering. Pre-orders are accepted right here.

“Thundershowers (In Ivory Towers)” includes two mixes of the title track, as well as two remixes of the b-side “Lead Me Astray”. Neither track was ever released on any proper Psyche studio album. The reissue also includes replicas of vintage artifacts: an insert contains a replica of the poster for the “Thundershowers” release show at Toronto’s Nuts and Bolts club, plus a special invitation card replica is also included (holding an MP3 download code).

The vinyl reissue comes in blue and black editions. The blue one is limited to 100 copies.