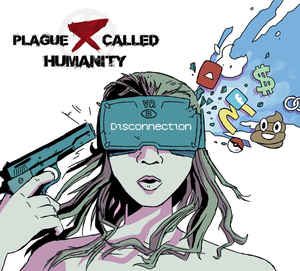 Background/Info: Plague Called Humanity is a band from the Czech Republic which after a few line-up changes released this debut EP early 2017. I don’t know if their band name got inspired by the “Plague Called Humanity” album from Prometheus Burning (2009), but it’s a weird coincidence.

Content: After an introduction track the music rapidly moves in to a furious merge of dark-electronics and metallic guitar riffs. The vocals are extremely harsh and here again mixing dark-electronics together with metal music. “Disconnection” sounds hard and brutal, sometimes mixing spooky-like atmospheres with their devilish electro style.

The EP features 5 original songs followed by 5 remixes accomplished by Dolls Of Pain, Qx-Rh85, Jerk In The Can & Doug Fury, ESA and BloodPact.

+ + + : If you’re into extremely powerful sound creation, this album could be something for you. I think it’s the kind of music that could appeal for dark-electro heads and metal addicts. Plague Called Humanity has accomplished a furious and explosive fusion, which get us back to the essence of crossover. I noticed cool remixes by Dolls Of Pain (the right band for this kind of music) and BloodPact.

I also have to say a word about the original and somewhat cartoon-like artwork of this digipak format.

– – – : I can’t get away from the feeling this band still has to find its own style. It now sounds a bit like metal freaks discovering electronic music. I also expected a bit more from the remixers. The mixing and especially mastering of some songs is another aspect that has to be improved. You sometimes get the impression of hearing a demo.

Conclusion: The idea mixing dark-electronics and metal music isn’t new at all, but it still makes sense. The band has to improve several elements of the production so let’s see what the future will bring.