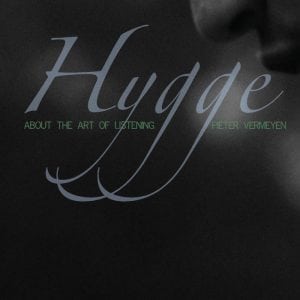 Content: “Hygge” moves much further than simply ambient music. It rather sounds like an imaginary soundtrack mainly composed with piano. Vermeyen indeed is a pianist although he clearly has a fascination for field recordings while you also will notice a saxophone part plus a second piano (both played by guest musicians) on one of the songs. The piano also creates a neo-classic feeling, which might remind some piano composers from early 20th Century. Several songs also feature whispering-like vocals sung in Dutch. It has something spooky. The original titled are in Danish, but translated in English.

+ + + : “Hygge” is a work made of reverie, but still revealing a kind of sadness. It makes me think to a sort of experimental chamber music of the modern times where the piano is the main instrument and has been joined by experimental elements such as field recordings and vocals while you also will notice a slow, linear kick on one of the cuts. The piano is next to this transcendental invitation also pure emotion. “Hygge” is a beautiful album.

– – – : This is probably the most unique work in the “Belgian NeuMusik”-series I’ve heard. It comes closer to soundtrack music and might appealing for a different audience. I think it’s the kind of production you can’t imagine without a visual accompaniment.

Conclusion: “Hygge” stands for beauty and emotion, but also as a challenge in this ambient series created by Wool-E-Discs.

Since you’re here … … we have a small favour to ask. More people are reading Side-Line Magazine than ever but advertising revenues across the media are falling fast. And unlike many news organisations, we haven’t put up a paywall – we want to keep our journalism as open as we can. So you can see why we need to ask for your help. Side-Line’s independent journalism takes a lot of time, money and hard work to produce. But we do it because we want to push the artists we like and who are equally fighting to survive. If everyone who reads our reporting, who likes it, helps fund it, our future would be much more secure. For as little as 5 US$, you can support Side-Line Magazine – and it only takes a minute. Thank you. The donations are safely powered by Paypal.
Tags: Pieter Vermeyen