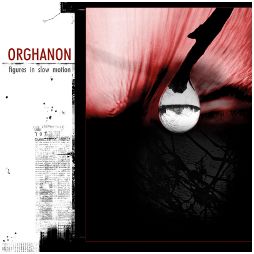 Content: Orghanon is a solo-project set up by Sergio Calzoni. You maybe know this artist for his involvement in bands like Alma Mater, Act Noir and especially Colloquio.

A solo-work always reflects to me a more intimate approach and that’s definitely an item when discovering “Figures In Slow Motion.” The opening track, which was released as a single, “Gone” is lust for the ears. Orghanon reveals a fascinating and mainly intelligent electro approach made of dark tones and an explicit ambient touch.

The ambient style rules over this work, which makes me speak about a cinematographic format. The entire album would be perfectly suited as soundtrack for a movie and/or documentary.

There’s a great progression in the writing of the songs while the low cadence makes it all very accessible. You sometimes get the impression of getting lost in a dark abyssal voyage (cf. “Ultra”).

Some piano arrangements (cf. “Far”) bring us back to pure soundtrack experiences, which also reveal meticulous, but minimal treatments.

“Hiatus” which was released as new single, is one of the most poignant cuts of the work. The progression running through this song is absolutely remarkable for the empowering cadence and overwhelming sound waves, which especially come through in the final part. But this opus clearly sounds like it was released for the unique purpose of a soundtrack and that’s also the way this album ends with “Nilskor.”

An interesting detail about this work is the use of some vocal samplings taken from other, and sometimes noticeable releases. I here especially refer to a sampling of Christian Wolz that was used on “Far.”

Conclusion: This work sounds like an ambient sound caress made of subtle arrangements, slow rhythms and fascinating atmospheres.