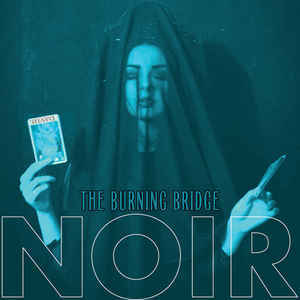 Background/Info: Noir is the newest band of ex-Spahn Ranch singer Athan Maroulis. This formation released a debut-album “Darkly Near” in 2003, which revealed an interesting ‘noir’-pop style. “The Burning Bridge” features one new song plus three cover versions.

Content: The title song stands for the essence of the Noir-sound. It’s a fully enjoyable kind of pop-driven music supported by dark synth-atmospheres and carried by the charismatic vocals of the front man.

We next get covers of Ministry (cf. “Same Old Madness”), Duran Duran (cf. “The Chauffeur”) and Roxy Music (cf. “In Every Dream Home A Heartache”). The originals versions have been meticulously melted into a Noir molt. It feels a bit evasive and even sweet for the Roxy Music cover, but still carried by bombastic drum patterns on the Ministry-song.

+ + + : The new song is the vein of the “Darkly Near”-work and is a cool piece of music revealing a very personal pop approach. The cover versions are pretty surprising because the original songs are really diversified, but Noir reworked them into something new and totally in the Noir-style. I have a preference for “The Chauffeur” driven by some repetitive, but somewhat transcendental loops and female backing vocals.

– – – : My single reproach is that I expect some more catchy structures and especially melodious passages, but I’m afraid I’m probably expecting some more ‘traditional’ electro-pop from a band, which is clearly not dealing with this sound approach.

Conclusion: “The Burning Bridge” is an original intermezzo in between two albums. It reveals a cool titles song and creative cover versions.