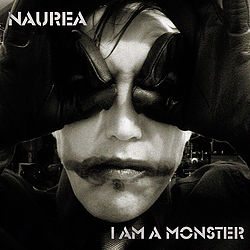 Background/Info: Naurea is a Swiss project set up and driven by Olimann. This band released a debut production in 2002 and an album in 2012. Olimann seems to be more active composing soundtrack music for theatre.

Content: “I Am A Monster” features 12 songs, which are driven by solid electro structures and powerful industrial guitar riffs. It’s not that easy to define the sound of Naurea, but you will rapidly notice influences moving from EBM to industrial to new-wave to metal. The work is a furious fusion between all these influences, which might make you think of a merge between Sheep On Drugs and Birmingham 6.

Especially the guitar parts remind me of late Birmingham 6 while some passages explore metal paths. The vocals have been produced with some cool effects on top.

+ + + : The influences are quite familiar, but it all together creates a rather original sound. I especially like the industrial-like guitar playing.

– – – : This album is missing a few noticeable cuts. It all sounds interesting, but without a real climax.

Conclusion: The sonic ideas behind this album are definitely more interesting than the result. I’m sure there’s a real huge potential behind this band, but unfortunately it doesn’t really come through. I however think this is a name to keep in mind.

Best songs: “The Day I Discover I Could Kill”, “I Am A Monster”.