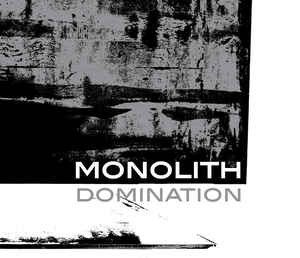 Background/Info: Eric van Wonterghem is a veteran active in the wider fields of electronic- and industrial music since the 80s. From bands like Absolute Body Control to The Klinik to Insekt to Sonar to Detune-X and of course Monolith, this Belgian icon of electronic music has already gained experience with a lot of sounds and influences. “Domination” is the 9th full length of his solo-project Monolith that is now active for nearly 20 years.

Content: Is it because Eric is now living in Berlin that his influences became more techno orientated? We have to ask him, but it all becomes clear that the latest Monolith releases are no longer into the heavier industrial debut releases. There of course is a noticeable evolution running through the work of Monolith and earlier this year released 12” (cf. “Time Running Out”) released on Sonic Groove revealed more explicit techno vibes.

“Domination” is the perfect synthesis of techno- and industrial music. The shamanic cadence leads you into a frenetic dance while impressive industrial treatments like crashes remind us of the origin of Monolith.

The work has been diversified with a few more tribal/esoteric-minded influences. This ‘Indian’- flavor is a possible reminiscence from earlier tribal work of Monolith. It now reflects imaginary moments of meditation and relaxation. The work indeed is more than simply danceable moves. There is also a minimal touch supporting the last part of the work. We here get reminded of the talent of this musician, which next to hard industrial treatments can also move into refined, subtle bleeps and treats.

+ + + : “Domination” proves that Monolith is not exactly repeating himself. This is a project with a great sound, which is in constant evolution. I was totally convinced by the mix between techno ‘Berliner’ influences and damaging industrial treatments. There are several cool songs on his album, but I really have a preference for “The Bell Witch” and “Bitter Years”.

– – – : No doubt about it, the techno input will not please all fans of the artist. It also is the most techno-orientated release from the Hands roster so I’m afraid some industrial die-hard fans will be shocked. Some of the songs are a bit too short for my taste.

Conclusion: The new Monolith sounds like an antidote to what Eric van Wonterghem did with Sonar! Monolith moves on with the flow and dares to innovate and that’s why “Domination” is a particular album in the artist’s discography although probably not the work that will enter into history…

Since you’re here … … we have a small favour to ask. More people are reading Side-Line Magazine than ever but advertising revenues across the media are falling fast. And unlike many news organisations, we haven’t put up a paywall – we want to keep our journalism as open as we can. So you can see why we need to ask for your help. Side-Line’s independent journalism takes a lot of time, money and hard work to produce. But we do it because we want to push the artists we like and who are equally fighting to survive. If everyone who reads our reporting, who likes it, helps fund it, our future would be much more secure. For as little as 5 US$, you can support Side-Line Magazine – and it only takes a minute. Thank you. The donations are safely powered by Paypal.
Tags: Berlin, Klinik, Monolith