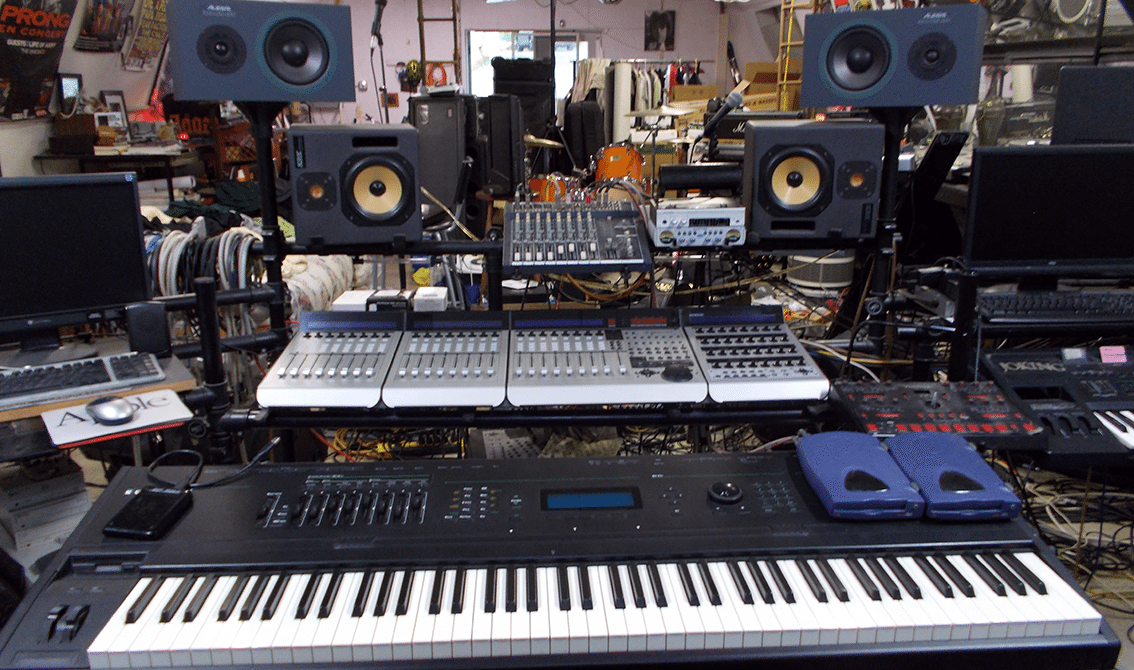 John Bechdel is playing keyboards with industrial-metal pioneers Ministry. Before he was already part of other famous bands like Fear Factory, Prong, Killing Joke, … . In spring 2016 a documentary about his career will be released on dvd via Furnace Records.

JB: 1981 – Moog Micromoog. I had gone to New York city to see Kraftwerk and my sister’s roommate was selling a synth so I bought it. I do still own it, it probably can still make some noise but developed some major issues which I never had repaired. It’s a single oscillator monophonic synth from the late 70’s way before MIDI and, no storage or programmability features.

JB: Apple Mac Pro 8-core with Logic Pro X, Reason, Mackie Logic control pro, two extender pros and C4 pro. Various plug-ins etc. I use Ableton for live but haven’t really gotten into it for composing, playing clips is cool but the sequencer doesn’t seem intuitive at all, I was expecting something more. I used to use Opcode Studiovision which was awesome for pattern based sequencing but since I switched to Logic I prefer linear sequencing.

JB: Logic Pro and Reason mainly. Although I’m old school and have a collection of vintage synth samplers and hardware. I have gone totally virtual. I did recently buy a Kurzweil 2500 because I love to play it. Beautiful pianos choir and orchestral sounds, I sit and play for hours. I have phased out my digital mixers, real to reals DATs etc., no need for that stuff anymore.

JB: For decades I used Akai samplers live mainly. When I played with Killing Joke in 1990-91 I played their original Oberheim OB-X’s live. With Ministry we just recently retired the Akai’s and use Macbook pro’s with Kontakt.

JB: I’d have to go with the Memorymoog and PPG 2.3 Waveterm. I bough both in the mid 80’s and still have them, they are beautiful to look at and compliment each other. The Memorymoog is extremely versatile for an analog synth and the PPG system had unsurpassed digital technology with analog filters, a winning combo. I’m also a big FM fan, I used and owned the DX-7 II FD extensively and still own and use the SY-77 perhaps one of the most underrated synths of all time. As I mentioned, I love the Kurzweil 2500 for it’s playability, ROM based sounds and VAST sampling technology. I used it with Fear Factory live for years. I still have a Juno 106 and Jupiter 8, my favorite Roland synths, both are still legendary. I own an Oberheim OB-X which is the fattest OB by far. I’m a big fan of Emu Emulators and Emaxs, still have an Emax HD SE, analog filters and great library. I have a Darkstar which I’m fond of, the joystick makes it unique. Speaking of joysticks, I think the Sequential Prophet VS is a legendary synth, never owned one but it had a classic wavetable sound of it’s own, even though it resembled the PPG it was also very underrated. When the D-50 came out it turned heads with its rich sounds but it was noisy and kind of lo-fi compared to the DX-7 II.

JB: Obviously I’ve had some interesting stories but the one I’m going to go with is my first live show with Killing Joke. I was using their old Oberheim OB-X’s and they were temperamental so I had sampled and mapped the sounds just in case. Well, right at a critical point in the set when I play the OBX, it went haywire. The singer, Jaz, had always told me to be ready for anything, ironically he wasn’t big on samplers, he looked at me like “what are you going to do now?”. I calmly switched to my keyboard and continued playing the samples. It was incredible!

JB: That’s a tough question, traditionally I would say analog since they have the warmth but digital synths gave us access to an unprecendented array of waveforms and sounds as well as control. Virtual synths always seemed a bit thin. For years I’ve been using primarily plug-in synths, many are quite good but I’m beginning to miss the real synths. The initial attraction to plug-ins is the ease of use, no cables or connections, interfaces, charts etc.

JB: I don’t look at it that way anymore, it used to be that way but things have changed. First of all: everyone’s a musician/producer/composer nowadays, it used to be a special thing to be a musician, people were impressed. Now all you need is a laptop and some basic hardware. Before, you needed a computer and software as well as a tape recorder, a mixer, some outboard gear (compressors, delays, reverbs, equalizers, etc.) samplers, synthesizers, drum machines, patchbays, cables, microphones, it went on and on, you could never have enough gear. So, things are so much easier now. I began before MIDI when different manufactures devices could rarely communicate with each other. We used calculators to determine delay times. We used real rooms for reverb. We didn’t have automated mixing so we charted everything or took Polaroid photos of the mixer. We spliced tape, used complex modular synthesizers. Nobody explores anything completely anymore, there’s preset sounds and loops all synced to the tempo. People take so much for granted now. Times have changed indeed.

JB: For me, the future is already here. It’s hard to imagine but I guess it will keep progressing to the point where absolutely anybody can make music at any level, you wont have to dedicate tons of time, money and energy or sacrifice family or social life, music production will be ubiquitous. The only problem will be sorting through all of it to find something interesting. There will be micro-niches sub-sub sub genres. I suppose the touring musician may even come to pass.