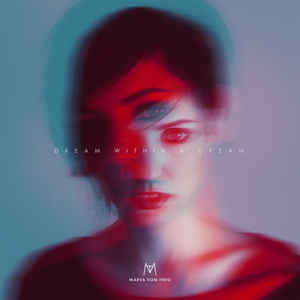 Background/Info: This is a new formation featuring Athens based singer Martha Voulgari and Vienna based composer Theo Foinidis. They self-released this debut-album featuring 12 tracks.

Content: The least I can say is that this duo doesn’t deal with a cheap emulation of an electronic established music style and/or band. They’re clearly influences rapidly bring us back to trip-hop music, but the global production is more personal. It’s an intimate approach revealing the beautiful and sometimes sensual vocals of Marva mixed with a modest sonic composition. Some passages are into pure reverie and that’s why I call it ambient-pop music, but the dreamy passages are sometimes becoming dark like revealing an obscure side of the band.

+ + + : I remain a true supporter of intimate compositions and especially when featuring a singer with such a sensual timbre of voice. I sometimes get the feeling the music has been composed around the simple power and magic of the vocals. And that’s maybe why it feels that personal and intimate. But the music is also quite interesting for the refined treatments and cool effects. Last, but not least the album is packed in an original lenient artwork.

– – – : I can’t get away from the feeling this is the debut album of a new formation. I get the impression there’s much more potential in this duo than what came out of “Dream Within A       Dream”.

Conclusion: Marva Von Theo might possibly appeal to  fans of Hooverphonic, but the sound is darker and more personal. In the end it’s music to listen to and figure your own imaginary universe.

Best songs: “What Is It About Me You Love”, “Secret Lover”, “Dead In Berlin”.

Since you’re here … … we have a small favour to ask. More people are reading Side-Line Magazine than ever but advertising revenues across the media are falling fast. And unlike many news organisations, we haven’t put up a paywall – we want to keep our journalism as open as we can. So you can see why we need to ask for your help. Side-Line’s independent journalism takes a lot of time, money and hard work to produce. But we do it because we want to push the artists we like and who are equally fighting to survive. If everyone who reads our reporting, who likes it, helps fund it, our future would be much more secure. For as little as 5 US$, you can support Side-Line Magazine – and it only takes a minute. Thank you. The donations are safely powered by Paypal.
Tags: Hooverphonic, Marva Von Theo