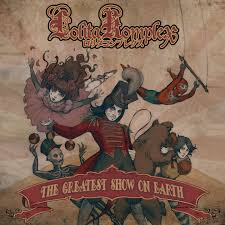 Content: Lolita Komplex was set a few years ago now by ex-Sanguis Et Cinis member Eve Evangel. The band was completed by adding a few more members and finally joined Echozone to unleash their debut-album (cf. “La Cabaret Des Marionnettes”). I was impressed by their surprising cover-version “All The Things She Said” (originally sung by the pop-duo T.a.t.u.), but we had to wait 2 more years to discover this new opus.

Lolita Komplex deals with a rather familiar kind of metal and rock-metal music. The production is fully accomplished and you can hear that there’s a real maturity behind this production. I was mainly impressed by the guitar, which I think is one of the main elements when you’re involved into metal music. But Lolita Komplex also reveals a rather funny or should I dare to say crazy side, which comes through on several songs. That’s for sure their rock attitude, which might be even considered as a little bit punkish.

The hardest cuts driven by merciless cadence and heavy guitar riffs. The vocals by Eve- and Nana Evangel create a delicious fusion between male- and female vocals, which are like symbolizing the evil and the beauty. The band has a strong image and a solid sound as well, but even if this album is quite accomplished they’re missing a few songs from which you can’t escape. I think it would have been a good idea to put “All The Things she Said” on it. I liked this version for the hard metal influences mixed with a kind of sweet-pop element. I’m nearly sure that this album will be more acclaimed on stage than on CD!

Conclusion: I expected a bit more out of this new opus by Lolita Komplex. I like their name and their image is really interesting, but they are not adding anything new to the rock-metal style.

Best songs: “One In A Million”, “Hide And Seek”, “Masquerade – Symphonic Version by Alexander Kaschte”.

Since you’re here … … we have a small favour to ask. More people are reading Side-Line Magazine than ever but advertising revenues across the media are falling fast. And unlike many news organisations, we haven’t put up a paywall – we want to keep our journalism as open as we can. So you can see why we need to ask for your help. Side-Line’s independent journalism takes a lot of time, money and hard work to produce. But we do it because we want to push the artists we like and who are equally fighting to survive. If everyone who reads our reporting, who likes it, helps fund it, our future would be much more secure. For as little as 5 US$, you can support Side-Line Magazine – and it only takes a minute. Thank you. The donations are safely powered by Paypal.
Tags: Lolita Komplex