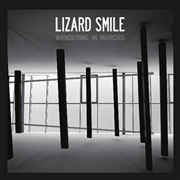 Background/Info: Lizard Smile is a Belgian formation, which is already active for many years. They released a few cassettes in the 90s and albums after the millennium. They now joined hands together with Wool-E-Discs to release a new work –still available as vinyl format.

Content: “Wandering In Mirrors” features 6 cuts, which are clearly recovered with 80s cold-wave influences. We’re moving through a dark and depressed sound sphere. The guitar mainly inject this emotional flavor to the work while the vocals, -which are sometimes reminding me of Peter Murphy (Bauhaus), only accentuate the cold feeling hanging over this work.

+ + + : The guitar playing is one of the band’s main strengths. There’s a real spirit emerging from the guitar parts, which are mainly coming through at “Silence In Your Eyes”, but still at the harder “Images Of Distance”. The vocals are another essential part of the work. The songs are well crafted and you clearly can hear this band became an experienced and mature formation.

– – – : There are only 6 songs featured so it rather looks like a mini-album instead of a real full length. That’s a pity because this is a cool work, which however is maybe missing a hit song!

Conclusion: Lizard Smile is a familiar formation from the Belgian scene, but definitely an underrated band on the international scene. I hope they’ll gain more recognition because those guys deserve it!

Best songs: “Images Of Distance”, “Silence In Your Eyes”.