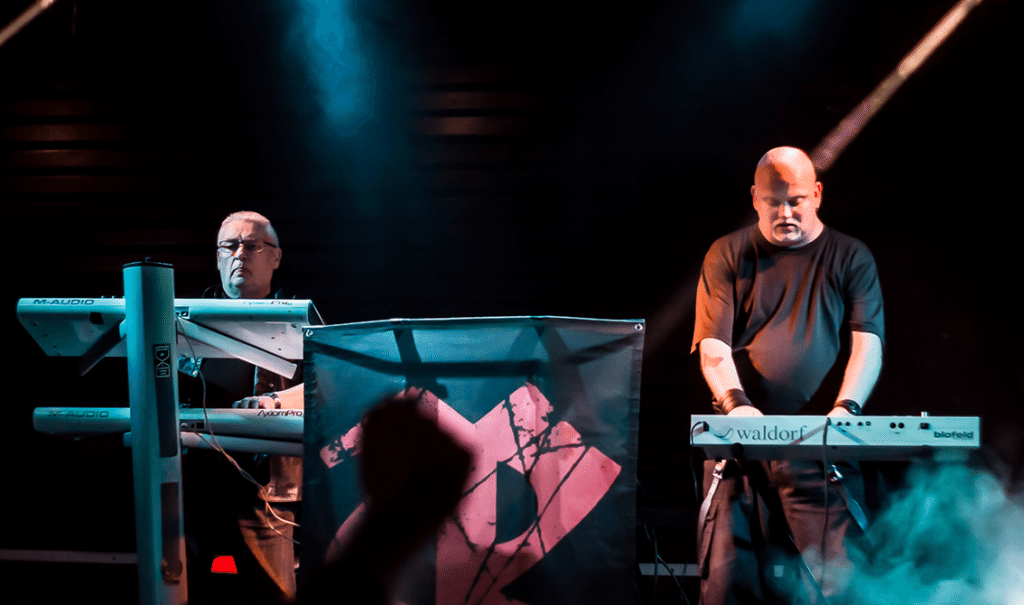 The Danish EBM/Industrial project Leaether Strip was founded in 1988 by Claus Larsen. Leaether Strip will tour North-America in March/April 2016 and recently released the digital single “Can We All Forgive?”, to help cover his husband Kurt’s many medicine expenses because of his failing kidneys.

CL: I bought my first synth back in early ’82. It was a Moog Prodigy. A monophonic old classic. No memory, no MIDI and no floppy disks. I taught myself how to play it and make sounds. Soon after that I started to write songs. I bought a Yamaha drummachine RX17 and used a double cassette recorder to make fake “multi tracks”. All except the drums was played live. MIDI and sequencer didn’t come until later, but I’m glad because it made me a better musician not to have all that.

CL: I use an old PC at the moment with Windows XP and Cubase Nuendo as the recording/MIDI software. I haven’t had it online for more than a few times so I’m still running on first Windows install after 9 years. It never really crashes on me, but it is getting a little too slow. I am slowly installing a new PC so it’s ready for when the old one kicks the can, so I also can run the new software in the future.

CL: I am about 50% hardware/50% software now. I like to mix the old synths with the software synths. My drums I sampled from my old drummachines (Roland TR-808, Prophet Drumtraks, Roland TR-707). I used to use DAT but now it’s all PC, and then I run it all through an old analogue equalizer and back to the PC to give it a bit of old school sound. My favorite synths in my studio are my Moog Source and Korg MS-20. My favorite software synths are the VAZ Modular and the Reaktor.

CL: I use 2 M-Audio MIDI controller keyboards and have all sounds, samples and sequences mapped out on the laptop. We also use a Waldorf Blofeld and a Virus TI2 if we aren’t flying to the gig. We try to change it now and then. I do not use Cubase for live, because it’s not stable enough for that, so we’ve used FL Studio for that, and we haven’t had a crash in 7 years. It’s simple and fast to setup. I change sets all the time so it’s important that I can do it on the go.

CL: My favorites for bass: anything Moog, really, I’m a huge fan. For pads: anything Roland. For noise and bass: Korg MS-20 for sure.

CL: In the studio: One day back in the late ’90’s I came home, walked into my studio and water was just showering down from the ceiling, on my synths! It took the insurance-technicians 4 months to get all parts and fix them. I was devastated. As for the stage, we’ve been lucky and also prepared, so the worst has been the laptop running out of power because some idiot (me) forgot to plug it in, and a faulty mic, so no biggies. I have two of everything when we’re out so this old boy scout is prepared.

CL: If it makes the sound I want and need, I don’t give a shit what it is. I hate all this gear snobbery! It’s a tool, nothing more, and if you’re good you can make anything sound great, that’s where the talent comes in. Yes, I love knobs and beautiful design and I am a sucker for the “old” sound of the analogue synths. All these new synths that are coming out these days sound amazing, but for me as a songwriter and programmer, more knobs and patch cord bondage isn’t writing the songs for me.

CL: At the moment it seems that most companies are returning to the basics, and that’s fine, so the newcomers can learn about the basics of programming a sound from the bottom. I still got most of my gear from the old days and I still use most of them. I hope this trend will make people stop using presets all the time. But not everyone is a nerd like I am. I love to dive down into new gear and see what I can get out of it. But these days I can’t afford a lot of new stuff so that forces me to keep on playing with the old stuff, and that’s all good, because if I get a sound idea I can program it in a minute, because I know the synths like my own backyard. My goal is always to write the best songs possible and knowing my gear makes it easier.

CL: This “no buying music” trend is forcing most artists to get out and play concerts to be able to make it work financially, and that’s a really good thing. Because that’s what it’s all about. It just sucks that it’s getting harder to pay the bills and that people would rather pay to see an asshole DJ playing his pirate downloads, than a performing band.