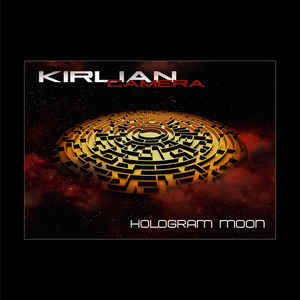 Content: “Hologram Moon” is still dominated by the danceable “Sky Collapse”, which remains one of the best songs of the Italian duo in history. It also sounds pretty Covenant-like and not only because of Eskil’s vocals. If you expect an entire album in this genre you for sure going to be disappointed, but there are more danceable cuts featured. Eskil Simonsson got however featured at another song.

The work mixes evasive electro-pop music together with more danceable pieces and the unavoidable experimental flavor on top of the production. I was also surprised by the track “I Don’t Sing” featuring Angelo Bergamini on vocals and dealing with funny lyrics as a declaration to Elena Fossi. Notice by the way John Fryer has produced this work.

+ + + : “Hologram Moon” is a surprising return for Kirlian Camera, which has accomplished one of their most noticeable albums in history. The album is more ‘poppy’ and ‘danceable’ than any other work although it’s much more than only ‘dancefloor’ music. Kirlian Camera fans will recognize the ballad and evasive style of the band accomplished with experimental sounds and arrangements. The work remains carried and blessed by Elena’s sensual and bewitching timbre of voice. But a great singer also needs a talented musician and that’s what Bergamini illustrates. He’s an old-school driven musician who still likes analogue experiments this way creating unique sound treatments.

– – – : There’s a hiatus between the most danceable cuts and the rest of the tracklist. It for sure injects diversity to the work, but it’s not that evident to switch from a danceable track such as “Sky Collapse” into a piece of reverie and later on the electro-ballad sung by Bergamini.

Conclusion: Kirlian Camera remains a particular experience in sound! A band you can’t compare to another, but simply moving on exorcising their own sonic ideas. This is for sure one of their best releases to date.