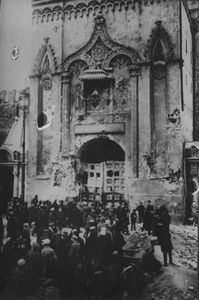 Background/Info: I received no background information about this band and the debut album “Isdalskvinnen” while there’s even less to find on the net. Karmiciel Wszy appears to be a Polish project, which since this release has already produced a few other releases. This work is also available as cassette, which has been released by Craneal Fracture Records.

The work is an intriguing concept. The title of the album is the Norwegian for ‘Isdal Woman’. It refers to a mysterious and unexplored case of unidentified women that was found dead in Norway back in 1970. The police found out that the victim could have possibly travelled throughout Europe under different names, which are some of the titles of the album.

Content: The sound covers different genres although they are related to each other. There for sure is a strong and main dark-ambient part, which sounds like having been written by industrial sound elements. You’ll notice the metallic sound effects and other typical field recordings-like impressions. One of the main characteristics and strengths of the work is the great, icy sound sculptures. The poignant and cold atmosphere hanging over the work totally matches with the concept of this enigmatic dead woman that was found.

The work is has marvelous and chilling sound atmospheres while dark, humming waves empower the obscure side of the work.

+ + + : There’s a noticeable and successful fusion between dark-ambient and industrial music.

– – – : It’s a pity the tracks remain rather short, which sometimes create a kind of unaccomplished feeling. Some cuts clearly could have been more elaborated

Conclusion: This is an exciting debut album by a mysterious Polish formation.

Since you’re here … … we have a small favour to ask. More people are reading Side-Line Magazine than ever but advertising revenues across the media are falling fast. And unlike many news organisations, we haven’t put up a paywall – we want to keep our journalism as open as we can. So you can see why we need to ask for your help. Side-Line’s independent journalism takes a lot of time, money and hard work to produce. But we do it because we want to push the artists we like and who are equally fighting to survive. If everyone who reads our reporting, who likes it, helps fund it, our future would be much more secure. For as little as 5 US$, you can support Side-Line Magazine – and it only takes a minute. Thank you. The donations are safely powered by Paypal.
Tags: Karmiciel Wszy