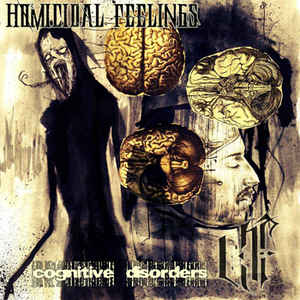 Background/Info: Set up in the 90s by Brazilian artist Giba Reys, Homicidal Feelings stopped all activities during a rather long lapse of time until the project got reactivated a few years ago. The album “Virtue To Vice” got released by Advoxya in 2014 while “Cognitive Disorders” saw the light of day at the end of 2016. The album is more a kind of EP featuring numerous remixes and only a few new cuts.

Content: Homicidal Feelings deals with a dark EBM format mixed with some classical dark-electronic elements. The sound is harsh and features various industrial sounds. The vocals are harsh as well. Next to the danceable aspect of the work there also is an obscure and sometimes disturbing atmosphere supporting the songs. The sampling ‘Allahu Akbar’ only accentuates the mystery and torment running through the songs.

Next to 4 new cuts there also is a song featuring Deadjump and a kind of cover/tribute of the :Wumpscut: song “Slave To Evil”.

+ + + : I really like the original edits by Homicidal Feelings. The dark and tormented EBM style was remarkably accomplished while the dense and heavy sound atmospheres inject this kind of angst feeling. This band deals with the coldest format of electronics and has composed a few brilliant cuts, “Sectarian Strife” being my personal favorite one.

Among the remixes I would especially mention the work of Larva and Subliminal Code plus the more minimal-like sounding remix of Atropine.

Conclusion: Homicidal Feelings in an interesting Brazilian formation if you’re in search of tormented EBM. The new songs are danceable and supported with frightening dark atmospheres.