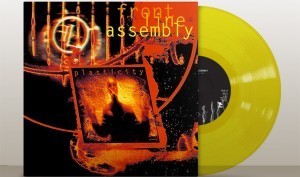 Out by the end of July is “Plasticity”, probably the definitive Front Line Assembly song, but allas, it never appeared on an album. “Plasticity” was released in 1996 following “Hard Wired” and featured two versions of “Plasticity” including a remix by Haujobb. The B-side was the track “Replicant”.

Today, nearly 20 years later, Artoffact Records reissues “Plasticity” on 10″ vinyl. The tracks from the single have been remastered and the artwork has been restored to produce a good quality sleeve. Side A contains “Plasticity” and “Replicant” while Side B contains two “Plasticity ” remixes by Haujobb. The second one is a long-lost almost never-heard remix by Haujobb, called “Dope Experience”. This very rare remix has also been restored and remastered and was constructed by Daniel Myer in the mid-90s.

The Plasticity 10″ is the definitive “Plasticity” collection; remastered, including a bonus remix, and with large-format Dave McKean artwork.

You can order your versions right here:

Since you’re here … … we have a small favour to ask. More people are reading Side-Line Magazine than ever but advertising revenues across the media are falling fast. And unlike many news organisations, we haven’t put up a paywall – we want to keep our journalism as open as we can. So you can see why we need to ask for your help. Side-Line’s independent journalism takes a lot of time, money and hard work to produce. But we do it because we want to push the artists we like and who are equally fighting to survive. If everyone who reads our reporting, who likes it, helps fund it, our future would be much more secure. For as little as 5 US$, you can support Side-Line Magazine – and it only takes a minute. Thank you. The donations are safely powered by Paypal.
Tags: Front Line Assembly, Haujobb