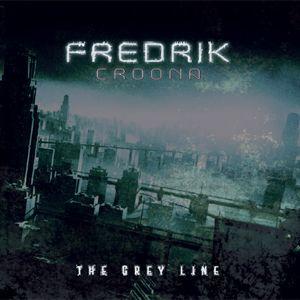 Background/Info: Fredrik Croona gained some recognition as a member of bands like Project Rotten and Cynical Existence, with both project revealing a harsh and enraged electro style. Fredrik Croona now strikes back under his own name to showcase a hidden side of his artistic brain.

Content: There are for sure some familiar Croona elements running through this work. I’m referring to the dark-electro style and some enraged vocal passages. But “The Grey Line” also explores other sonic horizons, which brought the musician to melodic and pop-inspired fields. The work merges merciless electro assaults together with future-pop resulting in a kind of industrial future-pop sound.

This is the most unsual work of this artist in my opinion is his most poignant and accomplished opus. Fredrik Croona reveals himself as a fine melody maker while remaining faithful to obscure sound treatments and harsh vocals. I sometimes experienced his distorted vocals on his other projects as exaggerated while he now reveals different ways of singing, which can still be harsh, but also clearer and charismatic.

Notice by the way that Patrik Hansson (Vanguard) and George Klontzas (Pre.Emptive Strike 0.1) did some guest vocals.

+ + + : “The Grey Line” reveals a fascinating balance between opposite styles, which sounds hard and accessible. It’s a powerful, enraged and yet melodic work featuring several cool songs.

– – – : I still think that a few vocal passages are too extreme and harsh.

Conclusion: If you think that future-pop stands for the sweet and innocent side of electronic music that will help you to find a girlfriend, Fredrik Croona has transposed the genre into an evil and naughty format. This is pop music touched by the hands of the devil.