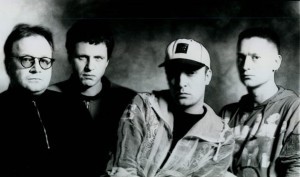 A few years ago, in 2008, the Flemish TV-channel Canvas broadcasted an episode in their Belpop series focussing on Front 242. The documentary was in Dutch and French and thus not always very accessible to those not mastering these fine languages.

But luckily enough there is the promoter of the Festival Forte in Portugal who has now translated the complete interview. You can view this rather well-done documentary below, this time with English subtitles.

Front 242 will play the Festival Forte on August 29, 2015 in the Montemor-o-Velho Castle in Portugal.

Since you’re here … … we have a small favour to ask. More people are reading Side-Line Magazine than ever but advertising revenues across the media are falling fast. And unlike many news organisations, we haven’t put up a paywall – we want to keep our journalism as open as we can. So you can see why we need to ask for your help. Side-Line’s independent journalism takes a lot of time, money and hard work to produce. But we do it because we want to push the artists we like and who are equally fighting to survive. If everyone who reads our reporting, who likes it, helps fund it, our future would be much more secure. For as little as 5 US$, you can support Side-Line Magazine – and it only takes a minute. Thank you. The donations are safely powered by Paypal.
Tags: Front 242