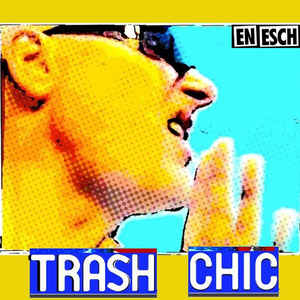 Background/Info: Klaus Schandelmaier better known under his artist name En Esch and his involvement in bands such as KMFDM, Pigface and Slick Idiot is back on track with a new full length under his own name. While En Esch released a few productions together with other artists, “Trash Chic” is his third album.

The album became quite diversified although featuring the familiar ingredients of En Esch. The typical guitar riffs –which remain pretty close to KMFDM, mixed with electronic loops and an industrial sound atmosphere are still making the essence of this work. The vocals are mainly spooky while the female guests inject a more sensual touch.

There also is a remix of “Do Me” (which is a song that was originally released on the previous album “Spänk!”) by Leather Strip.

+ + + : En Esch is an artist I respect for having created his own style. It remains an essential aspect of this album, which  mixes electronics with guitar, alternating harder, danceable cuts with softer and sometimes more experimental pieces. I’m still totally wild about the guitar riffs creating this industrial touch. There’re a few great cuts featured and I especially want to recommend “Sweet Lord” and “Super Ego” while the Leather Strip remix is another attention grabber. The fans will be pleased to discover an album featuring 18 songs.

– – – : I like the title of the album although the title-song is a rather disappointing cut. A few more experimental-minded tracks aren’t exactly the best exponents of this work. En Esch remains pretty faithful to his sound formula so there’s no real trace of innovation here.

Conclusion: “Trash Chic” is an appropriated title for an album moving in between hard, familiar and typical En Esch songs at one side and softer cuts where he likes to experiment on the other side. The fans will get what they want!