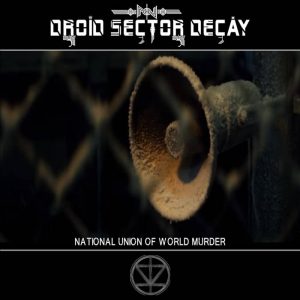 Background/Info: Droid Sector Decay once started as a solo-project and became a trio throughout the years. They have already released a considerable number of releases, which were mainly edited by Werkstatt Recordings. Underground Industrial Records is a subdivision of Werkstatt (Netlabel) on, which they also released a number of productions.

Content: This EP reveals 6 tracks, which are pretty eclectic although dominated by a mix of industrial sounds and electronic structures. From heavy crashes to EBM sequences and solid bass lines, the work sounds raw and somewhat unpolished. I noticed some female spoken-like samplings and male vocal parts.

+ + + : The industrial side is quite fascinating for awakening some good-old souvenirs of the 80s industrial era. But it’s much more than simply emulation and rather sounds as early industrial music composed with contemporary instruments and techniques. I also enjoyed the EBM flavor emerging at the surface on a few cuts while the vocals also  add the the accomplishment of the work.

– – – : I guess the raw and unpolished production has been intentional, creating this old-school effect although I think it would have been interesting to get a more professional production and mix. The cuts are somewhat monotonous after a while.

Conclusion: Droid Sector Decay doesn’t feature innovative elements, but it’s the kind of record that will possibly appeal for lovers of early industrial music. The EBM element is an interesting little bonus.