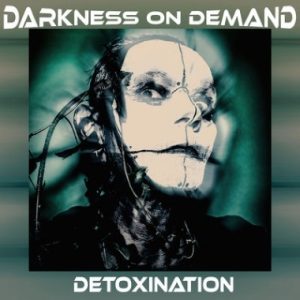 Background/Info: Dance Or Die is death, long live to Darkness On Demand. One year after the interesting debut album “Post Stone Age Technology” the band driven by Gary Wagner and Falgalas is back on track unleashing their second opus.

Content: The previously released “Detoxination”-EP was a real tough teaser and in a way illustrating the sonic line of the new album. The debut songs are hard and merciless; probably revealing the best songs those experienced artists have accomplished in years. Darkness On Demand has created their own EBM-style, which remains faithful to Dance Or Die. The charisma and the power of the vocals are here again a noticeable aspect of the album.

The work also moves into a few softer songs, which sometimes appear like a break to move on with harder cuts again. Now and then bombastic this work is more diversified as its predecessor.

+ + + : The three first songs are brilliant cuts illustrating the great writing skills of the band. “Detoxination” remains the ‘hit’ of the band, but “Brain fucked” is another potential hit. There’s a perfect harmony between music and vocals. The sound production is characterized by multiple little details, which is the trademark of great musicians.

Conclusion: No doubt about it, this album is one of the best productions in year by Wagner – Falgalas. This is a band with a very own sound and having now accomplished a highly recommended album.