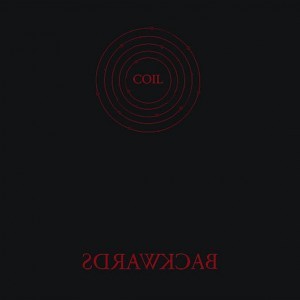 After the release of 1990’s “Love’s Secret Domain” album, Coil also started working on “Backwards” in 1992. The recordings were updated considerably between 1993 and 1995, and transferred in 1996 to New Orleans, where it was finished in the Nothing Studios of Trent Reznor (Nine Inch Nails). The album obviously saw the results of Jhonn Balance’s recent vocal coaching. 23 years after its initiation, these tracks finally have been preserved by Danny Hyde and made available.

Important to know, these recordings differ substantially from the later, remixed incarnation, “The New Backwards” (2008). What is being released now under the “Backwards” flag are the original versions which have appeared on various compilations over the years, and are now presented as originally intended.

The 12 tracks are available as a CD digipak and as a 2LP gatefold sleeve.

Since you’re here … … we have a small favour to ask. More people are reading Side-Line Magazine than ever but advertising revenues across the media are falling fast. And unlike many news organisations, we haven’t put up a paywall – we want to keep our journalism as open as we can. So you can see why we need to ask for your help. Side-Line’s independent journalism takes a lot of time, money and hard work to produce. But we do it because we want to push the artists we like and who are equally fighting to survive. If everyone who reads our reporting, who likes it, helps fund it, our future would be much more secure. For as little as 5 US$, you can support Side-Line Magazine – and it only takes a minute. Thank you. The donations are safely powered by Paypal.
Tags: Nine Inch Nails, Nothing Studios, Trent Reznor