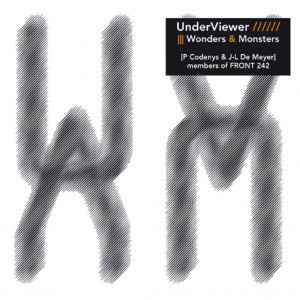 When evoking names like Jean-Luc De Meyer and Patrick Codenys everyone should directly think about Front 242. Both artists ever started making music as Underviewer, which is a project that has been featured on several limited editions of Front 242 releases. Nearly 40 (!) years after their set up Underviewer finally released their official debut album “Wonders & Monsters” on Alfa-Matrix. It’s a great piece of vintage electronics, which took me by surprise. This is what singer Jean-Luc De Meyer has to say about his early project and this late album.

Q: I noticed that you both set up Underviewer in 1978 ! What did you keep in mind from the underground scene at that moment and the first songs you wrote together?

Jean-Luc: At that time, there was almost nothing, the scene for that kind of music in Belgium was non-existing, we were working totally secluded from the outside world and nobody, even amongst our friends, understood what we were doing. We felt like being clandestine passengers.

Q: What has been the click to reactivate Underviewer and release a ‘debut’ album so many many years later?

Jean-Luc: We always wanted to release an album, but we never really found the time until a few years ago. Then we started to play a few concerts to check if the songs would really appeal to an audience, and the test was globally positive. Then we decided to proceed to the studio sessions. And we took our time, there no pressure of any kind.

Q: “Wonders & Monsters” smells like good-old vintage electronics? How different would have this album been, had it been released in the early 80’s?

Jean-Luc: Everything would have been more basic, with emphasis on the basses and rougher vocals, I guess. Also, there would have been less of the current rather melodic layers of sounds and noises in the background.

Q: I thought to remember that some early songs of Underviewer were more into sound experimentalism while “Wonders & Monsters” is more ‘danceable’ and into minimal-electronics (even somewhat EBM-like). A deliberate choice?

Jean-Luc: We composed more than one hundred ‘works’ back then, and they went into a lot of different directions. Some were very simple, pop, easily accessible and with vocals, some others were very tortured, instrumental, hermetic and experimental, yes. The possibilities of the new machines back then was gigantic and we did not want to exclude any direction.

Q: What does the title of the album reflect about the lyrical content, which on a few songs sound pretty intimate? And what is the link between the album and the special ‘arty’ packaging of the first edition of this CD?

Jean-Luc: The title “Wonders And Monsters” has for main theme the enormous potential range of human creations (as an echo of the infinite range of sounds we had access to), and the responsibility of each creator for his owns creations, as each creation leads its own life afterwards. So it’s a song – and an album – about conscience and responsibility, which are indeed very intimate and personal concepts. Quite logically in that sense, we spend a lot of time with the printer of the package to develop the artwork, and worked very closely together. We even took part ‘physically’ in the making (cutting, plying, gluing) of the cardboard package.

Q: How difficult is it to play live with Underviewer when all people know you as Front 242 members?

Jean-Luc: There is no particular difficulty for the both of us as Underviewer was our first band, after all. We know how we want to present ourselves on stage, it’s way more calm and appeased than 242, people should not expect a Front 242 substitute, that is absolutely not what we aim.