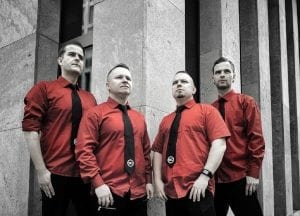 Solitary Experiments is a band I’m following from their very early debut. The German formation was set up in 1994 releasing their debut work on Maschinewelt Records. They later on joined hands together with the major company Out Of Line. Solitary Experiments never stopped increasing recognition and popularity. All over the years their music has evolved from dark EBM to future-pop and electro-pop. They last year released new opus “Future Tense” reveals a new vintage of great, danceable and melodic songs. I asked a few questions to singer and head of the band Dennis Schober.

Q: Solitary Experiments will celebrate their 25th anniversary in 2019! What have been the most important facts, songs & records, events ao you kept in mind and how do you see the future of the band?

Dennis: None of us would have believed that we would even get as far as the 25th anniversary. So many things have happened and it is hard to focus on one thing. I can definitely say that it wasn’t an easy path. We will always remember the foreign shows, beginning with Arnhem in Holland in 1999. Then our record deal with Out Of Line was the next milestone and then it went steadily uphill. The resulting album “Advance Into Unknown” which is still praised by critics must be mentioned, but it was the next one which included some of our biggest hits like “Delight” or “Pale Candle Light” that really brought us forward.

Next to seven studio albums, we also released some collaborative compilations, a retrospective box set and a live DVD for our 20th anniversary, plus the symphonic CD to the “Gothic Meets Klassik” event, which we are all very proud of. I also need to mention the jubilee shows (which started with our 10th anniversary celebration) and for which we always release a free compilation featuring all collaborating artists and friends. As you can see, there have been quite a lot of releases and we are planning to continue down this path.

Q: When I go back to the early work released on Maschinenwelt Records I first of all remember a band, which was more involved into EBM-influences although there was already an electro-pop touch on top. The style became more future-pop like throughout the years, but how do you perceive the evolution in sound and as musicians over the years?

Dennis: In the beginning we tried to sound like our idols. But we soon found our own stylistic path and through the growing experience we have learned to concentrate on what suits us best. This best explains the logical development of our music. We always put a focus on melodies and I have always tried to improve and develop my vocal skills. Throughout the years, we have noticed that the style that has changed has become increasingly popular with audiences.

Q: Your new album “Future Tense” took me by surprise; the sound and influences aren’t that new, but especially the global production process sounds to me as one of your most accomplished works in history. What can you say about the writing of this work and what has been the main focus in the production process?

Dennis: I take this as a compliment. What I can say is that we have been mastering the CDs in the same studio since “Phenomena”. With that album, we were overlooking the entire process and have been working with the producer to give it just the right sound. We have learned a lot from this, also in regard to pre-production. Michael has put all this collected knowledge into the production of the new album. It is good to hear that it was worth it.

Q: The title of the album “Future Tense” has something intriguing, even a bit symbolic and in a way related to the main source of inspiration, which remains future-pop music. What is it really all about and what did you try to accomplish releasing this album?

Dennis: We only tried to keep the standard of the last release, as we knew that it would be hard to top. We didn’t want to create a masterpiece, but just another waypoint on our journey. The main topic was clear from start on with the title and lyrics deliberately chosen to make you think about them. Basically, it’s about life and its transience. There is also an in-depth description to find in the booklet of the CD.

Q: The second disc reveals an impressive list of remixers. Did you have personal criteria to ask and/or choose bands to get remixed by and what have been the most surprising remixes from the album (which according to me are Empirion and Mono Inc.)?

Dennis: We always choose remixers with care. A lot of them have been on our wish list for a long while, like British act Empirion. I have to like the remixer’s style… like with Rob Dust or Raul Parra. Other mixes were part of an exchange with the artist. We wanted to give some newcomers a chance, as well, like German band ES23. Their track was a pleasant surprise, but I also have to mentions the versions of L’Âme Immortelle and the superb interpretation of Mono Inc.

Q: Solitary Experiments also became an experienced- and popular live band in the electro-pop scene. What makes the magic of playing live and what do you need, to speak about a successful concert?

Dennis: Being on stage is most important thing to us, as we have a direct feedback from the audience and are able to interact with them. A good show must include a solid stage performance, next to professional lights and sound. That is why we are using live drums, for instant. But one of the most important things is that we are all having fun. The feedback from the audience is the biggest thank you we can think of. The next big party is already booked – we will celebrating on November 8th and 9th in Berlin… with anybody who wants to attend.