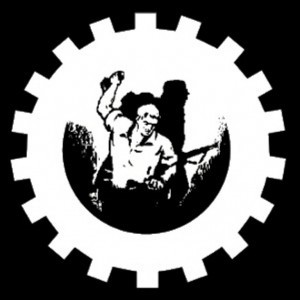 Stefan Rukavina is a pure ‘DIY’ (‘Do It Yourself’) artist, but still a real prolific creative mind who got some fame and recognition with his Bleiburg project. He next set up Rhesus Factor, which is dealing with good-old EBM music. Rhesus Factor released an impressive number of (mainly) digital releases, but the one (cf. “Mann Der Arbeit”) together with Claus Larsen on vocals is definitely the most noticeable one. I got in touch with Stefan and Claus for a look-back at this great electronic-body-music production.

Q: Can you briefly tell us the way you set up Rhesus Factor and how did you move from an industrial-ambient band like Bleiburg into pure EBM?

Stefan: Bleiburg wasn´t a typical industrial-ambient band. This project was focused at the beginning on collaborations with other bands, so that every possible genre from the ‘dark scene’ was possible. We have done neo-folk, dark-ambient, old-school industrial, experimental and various electronics, but also with bands like NTRSN, yelworC, Gin Devo of Vomito Negro, Parade Ground, Leaether Strip, … typical Electronic Body Music songs.

So there wasn´t a real move to EBM, only the EBM of Rhesus Factor has been different. I decided to get more into aggrepo-influenced EBM (Klangwerk, Tyrell Corp., Umo Detic, Scope, … ), but where you also can find other influences like minimal- electro, new-beat and anhalt-EBM.

I actually started with the recordings for a new project called Transponder. Transponder is Hanz Acid of Werksfront (voice and additional sounds) and me (music, samples, arrangements, 2nd voice). Soon you can find more infos at www.transponder-music.de .

Q: The album “Mann Der Arbeit” has been released a while ago now, so what have been the reactions so far and tell us a bit more about the collaboration with Claus Larsen?

Stefan: I know Claus from the Bleiburg period. We have done together the song “Scream Section” (which you also can find on the CD “Mann Der Arbeit”). When I finished the instrumental versions of the songs from the album I asked Claus for a new collaboration.

The reactions on this album are perfect. The first CD edition is sold out (the blue cover-one). The album is also available as limited DCD (only a few copies are available) and the normal version released on Razgrom Music. By the end of this year I will release a vinyl edition; only 100 copies in white vinyl and some test pressings.

This will be for a long time the last Rhesus Factor release!

All energy will be focused on Transponder and on the first album (cf. “The Strength Of My Fist”) you will find also one song together with Leaether Strip.

Q: Your lyrics are constantly referring to EBM featuring funny titles and passages. What is it all about?

Stefan: I love to sample voices and to give them a new content. In “Mann Der Arbeit” the samples are perfectly fitting with the lyrics, mostly written by Claus Larsen.

I am so tired of songs which must be darker than dark, be more full of depression than the mother of all depressions, … . No, with “Mann Der Arbeit” you will have fun!

Q: You are a real prolific artist, releasing an impressive number of songs and productions! Where do you find this energy and inspiration and do you have other ‘projects’ in mind?

Stefan: Music is the energy, energy is music! There is nothing more to say.

After both records it will be possible for us to play live in 2017. A third one called “Turntable Classix” will contain only cover-versions and will be also included in the live set.

If you love “Mann Der Arbeit”, you will also love all Transponder songs!

Q: You clearly seem to be a ‘DIY’-artist (although Razgrom Music released the CD format of the album). What motivates you to work this way and what’s your perception on labels, distributors ao?

Stefan: I don´t like to work for the profit of labels. Bands normally get 15% profit of a release, or in some cases bands get only 15% of the produced CDs. This is definitely not enough. Why must I donate 85% to a label when I can do the same job as they do? It makes no sense!

Normally I don´t trust labels. I for example have two copies of a ‘limited’ Current 93- album, both with the same limited number. Hahahaha.

I had enough requests for CD releases in the past, but I prefer digital releases. By the exception of the actual album “Mann Der Arbeit” only 3 other CD’s of Rhesus Factor exist (“The Past Is The Future”, “Persona Non Grata” and “Street Dance”), and 3 Rhesus Factor 7″ which are all sold out.

I got a good deal from Razgrom Music so I decided to release the ‘green cover-edition’ of “Mann Der Arbeit” on this label, because this album was produced as the last Rhesus Factor record for a long time.

Q: Claus, you’ve released an impressive number of productions, did numerous remixes and got involved in other bands (Am Tierpark, Sequential Access) so what incited you to join Rhesus Factor and do you and Stefan have further plans for Rhesus Factor?

Claus: Yeah, I have always loved working with other people, since Leæther Strip and Klutæ is only me, it feels great to share ideas and song ideas with friends. Stefan asked me some time ago if I would wanna write a lyric and sing on one of his old-school songs, and that lead the way to a lot more songs. I really like his music. Old- school to the bone as I like it.