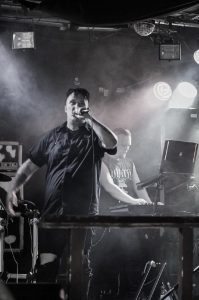 Hailing from Finland Miseria Ultima was set up 2016 by Aleksi Martikainen and Kimmo Huhtala. One year later their unleashed the debut album “Phosphor” on Advoxya Records revealing a mature production driven by dark-electronic influences and melodic leads. It’s hard to say if Miseria Ultima will become the next ‘big thing’ in dark-electro land, but they’re definitely one of the hottest new-coming bands from the growing Advoxya roster. I asked a few questions to Aleksi Martikainen.

Q: Miseria Ultima is a brand-new name active at the wider fields of dark-electronic music. Can you briefly introduce yourself (music background etc) and saying a word about your perception about dark-electronics and EBM generally speaking?

Miseria Ultima: Hello, we are a Miseria Ultima from Finland. For us, dark-electronic music and EBM both are a channel of inner- and different expression. It is a rarely touched ground in music, but as far we have understood, the people who are dedicated to it, embrace it fully. We have listened both genres for a long time, but just a while ago we began fully work with it. Our musical background lays in different kinds of metal projects, but also in other electronic music projects.

Q: I’m fascinated by the rather dark signification of the band name and at the same time intrigued by the title of your album “Phosphor” –the chemical element, but which can be also translated as ‘daystar’. Tell us a bit more about it all and what’s the importance of the lyrical content in Miseria Ultima?

Miseria Ultima: We believe that the years we were listening and working in a doom-metal area has affected our lyrics – and of course the choice of the band name. The lyrics are very important for us; usually we try creating an atmosphere with lyrics by including the meanings through metaphors. The lyrics has an introspect layer, but we also try to create a deeper exploration of specific themes. For example, “Phosphor” is a metaphor for an individual under pressure through a constantly changing society –adapting to it, to reborn through this light of torment.

Q: I noticed Miseria Ultima has been set up in 2016 while one year later you released your debut album. Things went really fast so how do you look back at the writing of the album and what have been the main difficulties you encountered in the global production process?

Miseria Ultima: Yes, it all happened very fast and we think it was affected by the past. We were involved with one dark-electro project in the past on, which we worked for a while, but it withered and finally died for several number of reasons.

The difficulties in the production of the album was to get it ‘sound right’. We usually have a very high level of criticism about our music and sound so it always takes more time to process and going through than we expect.

Q: Sound-wise I noticed a rather ‘classical’ dark-electronic approach although most of your leads have something atypical for this kind of music and are close to trance & dance productions! Tell us a bit more about this essential element of the album?

Miseria Ultima: We have always been fan of melodies. We love to create catching tunes, but the most important thing to us, is that the music flows through naturally. We truly enjoy uplifting tunes featuring themes about darker lyrics like the dissonance of joy and woe.

Q: The song “Vertigo”, which is the final track of the album is something pretty different and definitely more into ‘trance’ music. Does this song show us another side of the band and maybe a next sonic path you want to move on with? How do you see Miseria Ultima evolving?

Miseria Ultima: “Vertigo” is one of the older tracks featured on the album. It was written a while ago now and it truly stands for another side of our music, lyrically and musically. Although the theme of the song is about suicide  –as grim as it sounds. We have been discussing how to evolve with our music in the future, but it will all come naturally. We have been recording one new song so far and there’s a more gothic-tune running through it while the vocals and melody-line are a bit different as well. But in the end there is nothing different though.

Q: Today most of the labels complain about CD-sales while more and more new bands saw the daylight. Are you aware how difficult it is today to get a little bit recognition as new-coming formation and how do you as artist manage this aspect?

Miseria Ultima: Hard times, but we usually rather like to think, that if you work for yourself and be diligent, you will get something in return. Creating contacts, being respectful and polite –not asking too much, –these are the iron keys to golden locks in our opinion to get the success.