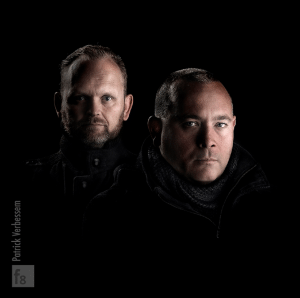 The Belgian Metroland duo is active for several years now and can look back at a successful discography. They actually released their fourth full length album “Men In A Frame” (Alfa Matrix) while they also released an impressive number of EP’s and even a massive 4CD-box compilation. The debut album “Mind The Gap” became an instant success and the popularity of Metroland should only increase after each new work. Metroland deals with electro-pop, which I personally define as ‘Kraftwerk-pop’, which also indicates what you might expect when listening to their songs. Passenger S and Passenger A took time answering a few questions about their new work.

Q: “Men In A Frame” is your fourth full length album since the successful debut opus “Mind The Gap”. I experienced this new opus as more experimental-like and maybe as the most personal one when it comes to ‘sound’. What do you think about it and what has been the main focus when writing this new album?

ML: It is a fact that after a while you develop your own identity, but we still do whatever we like to do, and create sounds like we feel. We invested a lot in new gear and new infrastructure and that gave us indeed access to a broader pallet of sounds evoking a more experimental approach. “Men In A frame” contains input from all our sides, be it the darker part of us over the more dance side to the more pop elements. The trigger this time was different from any other release as it was more outside of us. It was entirely on the concept of the pictures, which made it more difficult, but very challenging at the same time. We always worked inside out, meaning, we have an idea, a concept that we extended, sound by sound, song by song. With this album, it was the other way around.

Q: Metroland definitely likes to work around concepts. How did the new concept happened and how did you work on it?

ML: The entire idea is based upon the fact a normal person can end up in so many pictures when he accidentally passes the lens of a stranger taking a selfie or another image. That person will then travel across the world in that frame unknowingly of where he might end up. Thus the idea of someone being a ‘man in a frame’. We figure this to be a global theme. We have our vast crew, and Passenger K is our photographer for over 15 years, but she is also part of a collective of professional photographers, F8 (pronounced as Faith). So we asked each of them if they were willing to give us 2 of their images, exclusively for us, and give each picture an apt title. We would then absorb the image and create music for that image. Thus the title of the exposition that we did: “Pictures to listen to”. You never listen to pictures, do you? Well, Metroland made it happen.

Q: I’m always interested in concepts, but it’s sometimes hard to find the link between the theme of the concept and the music/songs properly speaking. It’s an interesting challenge but how the hell do you transpose a picture into bass lines, strings, rhythms…. and vice versa?

ML: It ended up being a difficult exercise for us. With the former concepts, you can develop the ideas and music yourself. Here we had to become one with the image, how does it feel. What does the image do to you, the atmosphere it breathes, the message from the photographer…so many elements.

And one of the most difficult parts was to merge our ideas into one, because an image (same as a song) brings up different feelings up per person. Some of the songs, we had to restart 5 times or more, as it didn’t fit. It took us 3 years to finish the entire concept, and we truly believe the atmosphere of the pictures matches with what we felt at the time of the sonic creation. The booklet has information on what the photographer had in mind when taking the picture and what we felt during the process of making the music. An interesting read.

Q: Metroland has released an endless number of EP’s (even on vinyl) so what’s the fun and especially interest today to release this format and what does it mean to you?

ML: It gives the opportunity to step outside of the tight album concept…a little, because all our releases remain linked to a concept. When creating so called B-sides, we can experiment a little more without being trashed down. Songs we feel that don’t fit the album can be used on EP’s, and it also gives the opportunity to get other artists on board that remix your songs, giving that nice extra. We like remixes, and we do care a lot about them as well. We would never just pick bands because they are popular. We only pick out bands to remix us that we like ourselves, and where we are certain  that they can bring that extra to Metroland. And we still have a huge list of bands we like to be remixed by.

Q: I often speak about ‘Kraftwerk-pop’ when I’m listening to Metroland and I get the impression there’s a kind of hype going on around this particular electro-pop music. What do you think about it and are you in touch with some of those similar artists?

ML: We are in touch with similar artists and many others as well, of course, so many good bands and musicians out there with the right ‘down to earth’ attitude and love for the solid electronics. We are happy to read that there is a hype going on, we can only benefit from it because when we started over 6 years ago, there wasn’t that many fuzz around all this. And we got tagged with the Düsseldorf-stamp instantly. Yes, we are heavily influenced, but then again, who isn’t actually when doing this sort of electronics?

Q: You both are working together for years now. What makes the chemistry between both of you and how did you evolve as musicians/artists throughout the years?

ML: We started early 90s indeed, and we are still doing it together. We reckon the fact that we never cared about what others are saying about us and the fact we still do this because we like doing it makes it we are still going. We have enough similarities in electronics and more than enough differences to create something in between. That is the strength of Metroland. We can be compared with the so-called Godfathers of Techno until eternity, but we don’t care, we are who we are and create a sonic pallet the way we want it. We changed over the years in style, but the basics are still there: a nice bass line supported by nice sequences and a rhythm that prevents you from being lame. And when in the studio we have fun over a good beer and don’t feel any pressure to deliver, for which we feel grateful to Alfa Matrix. We delivered them a great deal of grey hairs over the past 6 years, but they have come to a point that they realize how much care and energy go into every tiny detail.