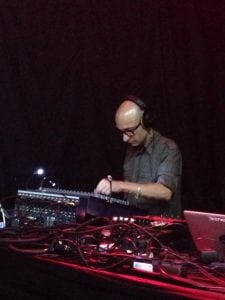 Matter is an Italian solo-project set up and driven by Fabrizio Matrone. The project is already active for a couple of years now and has released different albums on labels such as Le Petit Machine, Soviet Media Kontrol and Kvitnu. The new opus “Primitive Forms” has been released on Ant-Zen revealing a magic sound fusion between industrial-techno, IDM and dark-rave music. The work belongs to the best progressive industrial releases from the past few years or to the darkest techno/trance productions.

Q: How would you introduce yourself as musician and the different projects you’re involved with?

Fabrizio: My name is Fabrizio Matrone and I’m an electronic music producer better known under the moniker of Matter and Heidseck. Matter is a project exploring the territories of industrial, rhythmic noise and experimental music. The main peculiarities of this project are repetitive rhythms and abrasive sounds supported by deep bass immersed into a sea of noise. Heidseck is a project drone/ambient with an isolationist touch. Since a few years I manage the label Subsidence with the film maker Pier Paolo Patti and other collaborators like Lino Monaco of Retina.it and Pier Giuseppe Mariconda, known under the moniker of Prg/M.

Q: Matter clearly appears to be your ‘main’ project and also the most prolific one. What have been the biggest satisfactions so far and might we consider your newest work released on Ant-Zen as the ultimate consecration?

Fabrizio: Of course it has been a great satisfaction for me to be published by a label like Kvitnu, and it has been such an honor to be remixed by Orphx (the 12” will be released the 14th of September by Concrete Records). The new album released on Ant-Zen represents a big goal. I’m not sure if I can define it a consecration, but it is an important event for my music career. A label like Ant-Zen and some of the bands were formative and deeply influenced my sound.

Q: What are the most essential elements –referring to concept, influences, sound… we’ve to know about “Primitive Forms”?

Fabrizio: The concepts of my albums are frequently inspired by geology, especially events or a specific process that sometimes assume a metaphoric role. “Primitive Forms” is inspired by the reading of an illustrated atlas of fossil distribution in Southern Tethys ocean. It describes the classification and evolution of fossil during the past geological ages when the Earth was an entirely different place to live compared with modern age, and different weather conditions, morphology and the atmosphere were absolutely hostile to the human race. These primitive lifeforms existed until the environmental conditions changed, and now there remain impressions, or traces are preserved in all their essential, but complex functional primitive forms. Probably in a distant future a lot of highly developed objects, buildings or organisms will be considered as ‘primitive forms’. Even the sound and the titles of the tracks reflects this concept.

Q: Sound-wise and in my opinion, the album belongs to the most progressive side of industrial music, but still to the darkest side of techno music with as main particularity real sophisticated sound treatments. Does this description fits with your own perception and what’s your personal perception of the “Primitive Forms”-sound?

Fabrizio: I agree with your description, the link with the industrial music has always been present, but now the rhythms are faster than in the past, orientated to techno and to the dancefloor. From a certain point of view, they’re closer to the first productions.

Q: How do you explain more and more ‘industrial’ artists (where you belong to) are progressively experimenting with different kinds of ‘techno’ music?

Fabrizio: I ignore the reasons why even more industrial artists experiment with techno, but I think that this interaction and contamination between industrial music and techno is very interesting. Personally I’ve always been interested in a certain kind of techno, so for me it has been natural to deal with it. In the past albums there were good tracks for the dancefloor, but I played they in a slow way, for example around the 60-80 bmp.

Q: What means playing live to you and how do you transpose your music from a studio recording towards a live recording?

Fabrizio: The live dimension is a gratifying experience for me; this allows me to interact directly with the audience and I can look the reactions of the people when I play this or that track. During the live shows there is a good margin to the improvisation and good ideas for new tracks can raise, of course! Also, the occasion of a live recording is strictly linked to the possibility to make new friends, old friends and to live interesting situations like festivals or other. For the live shows I use a daw helpfully configured where I upload some samples that I can manipulate, some synths and few outboard effects.