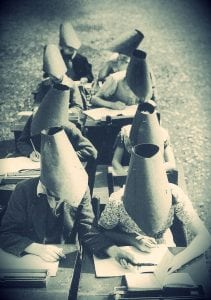 Belgian solo-project Kilmarth is driven by Cédric Wattergniaux. I know Cédric for quite a long time. We both got involved with Side-Line magazine. We met at festivals and always had great moments talking about music. I know him as a passionate music lover with an eclectic choice. Throughout the years he started composing music on his own and this way he set up Kilmarth. A first self-released EP “Catharsis” saw the daylight. It might be defined as an electronic mix between multiple influences, but in the end it comes close to IDM and experimental electronics. This interview is an opportunity to get more familiar with this new project.

Q: It seems you’re already composing music for several years now. How did it all started and how did you finally come to deal with this kind of music?

Cédric: As long as I can remember, music has always been an important part of my life. I listened to it, analyzed it, I wrote about it … but my biggest dream has always been to compose it. This dream was buried deep within me, but my ego told me that I was not able to do it. I once made the very late decision to finally take music theory lessons at the local music academy to better understand what music was from a theoretical point of view. Then I tried the classical guitar, which I abandoned by acquiring my first synth, a Korg Triton. As for the musical style, I did not try to get into a current one, it’s naturally the sounds that I liked the most that I chose to compose the music that related to a genre already present that I of course, liked a lot already.

Q: The name Kilmarth is directly linked to the great Daphne du Maurier, but what inspired you in this project name and the work plus life of this author?

Cédric: “The House Of The Strand” is a book I literally devoured when I read it, about 15 years ago. I am passionate about history, it is also my job (I am a history teacher) and the idea of time travelling has always been a child’s dream. The idea also to ask the question… Is it the reality of this trip or was it solely based on the absorption of a drug was a very interesting idea. So, I like to say that music is that drug that can be taken to help us penetrate other worlds, to penetrate the brain mysteries of some great composers of our time or earlier. It also makes me think of this excellent movie, that is for me, “Strange Days” by Kathryn Bigelow and James Cameron (1995) where the hero penetrates the recorded thoughts of people by means of an apparatus connected to the brain. Music is a legal drug that has the immense power to make us escape and to paraphrase Dave Gahan, that unites people who are so different.

Q: You recently self-released your debut work “Catharsis”. What is it all about? What did you try to accomplish (sound-wise) and what has been your working method?

Cédric: I fell into a big depression almost two years ago. I could not do my job anymore. Finding myself in front of my DAW and my synth has become gradually a habit and also a therapy to get out of this problem. For 6 months, I almost never left my studio and “Catharsis” was born from that. Fortunately, I was able to count on my family and a handful of friends who have always supported me.

Q: “Catharsis” is the kind of work I instantly linked to productions released on labels such as Ad Noiseam, Tympanik Audio, Ant-Zen, Mindtrick Records, M-Tronic… Do you feel related with these labels? Would you like to get signed by a label or do you prefer the DIY attitude?

Cédric: These are magnificent labels that have written the most beautiful pages in the history of our scene. It would be an extraordinary honor to be part of these record companies. I think that the power of a label to distribute music is a major asset in a society where it is now necessary to put music almost in the ear of an auditor so that he can listen to new things. I do not have the time or the gift to be able to handle all parts of the music business as I should while living a normal life with my family. On the other hand, it is also important, for an artist, to have a free hand in the creative process. It is therefore necessary that everyone can have his own territory for the partnership to be effective. It must also be said that the world of music has experienced an incredible upheaval in recent years. Will these labels still exist in five years? The future will tell.

Q: “Catharsis” is a sonic crossover between numerous genres and influences, but how would you analyze the sound of Kilmarth and how do you see yourself as an artist?

Cédric: I, like many other people before me, served as a sponge to several artistic movements (literary, pictorial, …). The daily life that I could absorb for years and reject in the form of “Catharsis”. It is difficult for me to highlight, for example, a musical genre that I particularly like to achieve this result, although it is obvious that electronic music, in general, remains the one that has the most marked throughout my life. For the rest, I like to control what I do; like composition, production, artwork or even videos. Kilmarth is a personal project, although I like the influences of outside musicians like the help of a friend for one track on “Catharsis”. I would like to see more collaborations like that on future productions.

Q: You’ve been involved with Side-Line magazine for numerous years. What did you learn from this experience as a journalist and does it appear to be a precious experience now that you’re composing music yourself?

Cédric: My Side-Line years were an extraordinary experience.  First of all because I was able to meet people who belong to our scene and that I respect a lot: you, Séba Dolimont who remains one of my best friends, Bernard, Benoît… I could also ‘meet’ people who I admire a lot musically like Klaus Kruse (PNE), NoyceTM, Mesh, Das Ich, De/Vision, Iris… It was a wonderful school to discover how the world of music is from the inside. From these different elements, I was able to build my project by being influenced by countless elements that have appeared throughout my life. Composing my music has also brought me even more respect for these artists that I met since the first demo to flamboyant careers. Each piece sometimes hides many efforts and often an incredible job that most people who listen to music or criticism cannot imagine. So I would say that the influence exists in both directions. I cannot criticize an album like I did in the past…