‘Click Interview’ with Indarra: ‘Why Bother Creating Something That Is Derivative, That’s Already Been Done Before’ 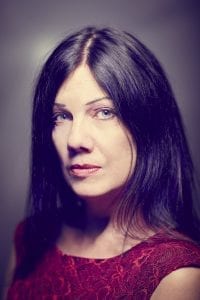 Does the name Sue Hutton make ring a bell? If not you might remember Rhea’s Obsession, the band she got involved with during the 90s. Two albums got released on Metropolis. Sue Hutton is now back on track with a new project and a new challenge. I experienced the debut album “Walk On Fire” as an eclectic opus, which might now remind to Massive Attack and next to pure dreamy music. I’ve been in touch with the Canadian artist who clearly is a passionate artist and authentic person.

Q: What did you keep in mind from your involvement with Rhea’s Obsession and how did you come to set up Indarra?

Sue: Well, I love making music for the sake of art and creative release first and foremost. In Rhea’s Obsession our attitude was always that we created art for the sake of art, and created ritual music that had meaning and a sense of intent for us. It’s the same with Indarra –rather than designing music that would fit a particular audience, I wanted to create music that was personally fulfilling and offered expression to something I was experiencing.

Dave Heckman (owner at Metropolis Records, who’s always been very supportive) and I were talking on the phone, and he offered to release a new project. I was interested in creating music specifically for soothing, calming, relaxing for my Mindfulness work (I work as a social worker and teach mindfulness in cancer, autism and other communities), and he suggested I start a new band. I sort of gulped, and the next sentence said yes. I called some producers I know (and some of them I had worked with in Rhea’s) and was thrilled that they all said yes and jumped on board. I wanted it to be sort of a mandala of producers and players of different influences to bring different vibes.

Q: So how does it feel to start this new project nearly 20 years after the last Rhea’s Obsession album (2000) and how did you evolve as an artist?

Sue: How does it feel –good question, and there are LOTS of answers to that. It feels incredible to have the support of Metropolis to do something new and creative. It feels incredible to have support of some of the best musicians around playing and producing with me. It feels challenging knowing that the industry has basically turned on its head since I released an album. It feels so good to open my throat and feel the power coming out again in a way I hadn’t felt for years. (I’ve been doing some singing and playing in community settings –but not real connecting music of power -at least that’s how I feel when I get to express myself vocally in some of the tunes we’ve written with Indarra on “Walk On Fire”.

Blurring my social advocacy and music was a natural evolution. There are “Walk On Fire” tracks that feature guests –and they are people who can speak directly to political issues as they have lived through parts of our system that I have not. Peter Park is an incredible activist with whom I have the pleasure to do human rights advocacy work with. Peter survived the abuses of Ontario’s institutions for people with disabilities and has worked to shut these institutions down across Ontario. Peter guests on a track called “Eternal Dreamer” and tells the story of his survival and ability to keep dreaming, and Shandel Shand has lived experience in the prison system and is speaking out about change for women and mental health issues on the track “Two Separate Worlds”.

And right -the other way I’ve evolved, is technologically! In tracking my own vocals. Everyone was so supportive, knowing I’m a total technophobe –they helped me get set up at home with a great microphone (the amazing Toronto sound engineer Peter Hudson at Long & McQuade loaned me a beautiful mic –an APEX 450 that is no longer made. He said he wanted me to sing through it and thought it would sound great on my voice. Holy nice guy! Then Eric loaned me an interface, and Kevin got me set up to record vox at home, and voila. I tracked all the vocals on “Walk On Fire” myself!)

Q: You already mentioned the guests who joined in, but how did the writing process of the album happened and what have been the main difficulties you encountered?

Sue: Like I mentioned above I tracked my own vocals and did it at home, so that created an easy way of working across multiple studios. I often would start off with a simple keyboard track, a little percussion groove and some vocal melodies. I would send this off to one of the producers –Kevin Laliberte, Chris Gartner, Scott M2 or Heiki, and we would trade tracks back and forth. So a lot of this was written from several homes! Vocals for a number of songs were tracked in a wood cabin in the Precambrian shield by the lake. So I had the beauty of the lake, the starry nights and the pine forests to inspire me.

I guess the main difficulty I can think of was the process of letting go in the end and having to send it all down to Metropolis and not tinker anymore! I must say the process was very smooth with Kevin Laliberte –the track “Falling Into You” was written by distance –and he sent me tracks to sing to –and the words and melody spilled out very naturally –what you hear on the album was all first take.

I called in Chris Perry, my old mixing producer from Rhea’s Obsession’s “Between Earth And Sky”, to be that third party neutral set of ears to do the final mix and tie it all together. That part was super fun.

Q: I experienced “Walk On Fire” as a deeply artistic creation and especially because of its authenticity, but it also became an eclectic work. What can you reveal about the sound properly speaking and the influences running through this work?

Sue: So nice of you to say. Thank you –such a compliment. I’m definitely interested in making artistic and authentic work… Why bother creating something that is derivative, that’s already been done before, you know? I called people together who make a range of diverse sounds and are mega talented to create this, and that was part of the aim in getting that diverse quality.

I love the feel of lush atmospheric soundscapes supporting vocals, and the moods of mysterious ocean sides and mountain scapes. I spent a year in India years ago, and adore the modal music of Ireland. The richness of the drone backbone to paint chords and melodies over always excites me as a starting point. Believe it or not, I’ve never been to Ireland (!) and need to get there. My dad’s side of the family comes from there and I think I’ve inherited a little of the love of Irish music in my blood. I have friends who speak Gaelic who I go to for help with translation and pronunciation for the songs that are in Gaelic on the album. I love singing in other languages besides English.

Q: The lyrics clearly reflect a passionate and engaged artist. What did you try to express –maybe exorcize, and is there any link between the lyrics and the title of the album -which I think was also meant to become the title of the third Rhea’s Obsession-album?

Sue: Thank you for that question. Nice one. In these recent years there were times that I couldn’t see creating an album and sharing new creative works with the world. Since Rhea’s, I’ve been through some life journeys –and have had an amazing child (I’ve been blessed with a total musician, Kai –who I now 11 years old!), and have gone through a tough divorce (divorce sucks, especially for kids btw – thank gods Kai has a deep love and devotion to music to lean on). I’ve lost things, and gained things and I suppose what’s important becomes a little more crystallized. Human decency, cultivating our inner power, inclusion, kindness, reaching out to others, striving to be the best humans we can. Each human interaction counts. It’s a journey and I’m not always perfect, but want to be more compassionate in every moment. Working in collaboration with activists with stories to tell was important to hear their own words –not mine telling their stories. It’s an honour to me that Peter, Shandel and Mika were a part of this.

Turning to the light within has always been a theme for me –relying on our own inner light and sharing that with others. Lyrics and the breath in “Turn The Light Within” and “Illuminate” speak to my love and connection with Mindfulness practices of the breath.

“Walk On Fire” was on track to be the third Rhea’s album, and we obviously never released it. None of the songs that were written made it anywhere –and finally with Indarra thestef time was right to engage this theme. “Walk On Fire”’s songs are all brand new, but the concept of walking on fire -enduring challenge and hardship in life and emerging triumphant on the other side is the key theme for this album. We’ve been doing some Rhea’s Obsession tunes live –which has been an amazing experience.

Q: A first clip from the song “Turn The Light Within” has been released. What did you try to express by the clip, which is featuring Athan Maroulis -who already sung with you on Rhea’s Obsession “We Three Kings”?

Sue: “Turn The Light Within”, as I mentioned is that key theme of mine. Engaging our own inner light –our own inner strengths and shining that outward. The practice of fully immersing myself in the visceral experience of my breath, of being grounded on my own two feet and feeling the incredible sensations of being alive is reflected in that song. Having Athan join on vocals for that just gives it that much more humanity. Athan and I have been long overdue to create more works together, and we have more up our sleeves. Also in the background you can hear Kevin Laliberte’s breath tracks as rhythm track, and he also added interesting layers to it with the production work of Deb Sinha’s percussion. It all layered nicely together as a lovely and simple track about our inner strength. When we had guest vocalists, guest percussionists, and an amazing full band at our Toronto CD release we closed the night with this song, and I think we played for well over 10, maybe 15 minutes –offering that light for people to take home. I hope the full album offers some light for people. We all can certainly use more light in these dark times.