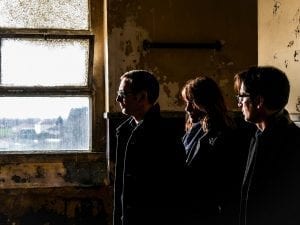 Happiness Project is the French trio Christelle Fournioux (vocals), Fred Tuyeras (vocals, machines) and Cyrille Tuyeras (machines, bass). After a first self-released album (cf. “Remove Or Disable”) released in 2008 they later on joined hands together with the French label BOREDOMproduct. They released a new album (cf. “9th Heaven”) in 2012 and a few EP’s. They this year unleashed their third full length (cf. “Mutation”), which in a way marks the return of the French electro-pop trio dealing with this typical and easy recognizable BOREDOMproduct sound. This is what the band has to say about it.

Q: Your new album “Mutation” is the first one in six years. When did you start the writing of the new songs and what did you keep in mind from the entire composition process?

HP: We started “Mutation” as soon as “9th Heaven” was released. We had already thought about our new album. We wanted to make it clear to ourselves, that “Mutation” would be darker, closer to our native audience and more in accordance with our musical background. However, we also wanted “Mutation” to be closer to our state of mind, our spirit and our way of making music: a deeper insight into our preoccupations, a world which is constantly changing and where things often remain incomplete.

Q: The work features the contribution of label mates ‘JB’ (Dekad) and ‘Member U-0176’ (Celluloide). What have been their real impact and what does it reveal about the ‘sound’ and ‘friendship’ between the BOREDOMproduct artists?

HP: Member U-0176’s, as well as JB Dekad’s contributions to our album came from Member U-0176 himself. He wanted “Mutation” to sound differently, especially as far as rhythms were concerned. He knows we particularly like JB Dekad’s work, in this sense. As BOREDOMproduct is a family of artists, we automatically agreed with this idea. It turned out to be quite effective and we like the work made by JB Dekad on our songs.

Nevertheless, this doesn’t reveal much about our relationships within the label, as we all live in different French cities, far from each other. But we all look for the same goal: a post-production quality which fits the label’s musical style and audience. Our relationship with the other groups of the label consists in listening to their music with a true interest and a great attention.

Q: I think “Mutation” reveals an interesting twist between harder and somewhat EBM-driven songs at one side and pure melancholic electro-pop songs at the other side. Where does this duality comes from and tell us a bit more about “Mutation”?

HP: The duality which is obvious in “Mutation” comes from the guidelines we had defined before starting. We wanted to express that nothing is permanent in this world and that things switch from one aspect to another. Change, duality, mutations are part of mankind, so what better way than expressing all this through various musical styles, ranging from harder tracks to more EBM-driven songs! This is what the world is made of: as we say in our song “Mutation” : ‘Nothing’s complete’!

Q: The lyrical content clearly has its importance. What did you try to express and what have been the main sources of inspiration?

HP: Sources of inspiration have been numerous: from Japanese mangas to Sci-Fi movies, from personal experiences to a more philosophical approach of life, from Tim Burton’s world to daily-life concerns. Our lyrics are meaningful because they carry out the perceptions of life we have. We do not really try to pass any message, but we simply want to share our ways to face reality, our concerns about the world. We wanted each song to be a chapter of a broader ‘Fairy Tale’, which would be about Humanity.

Q: You contributed to the ‘tribute’-compilations to Etienne Daho and Martin Dupont. How was it working on these cover versions and especially considering both artists are French ‘icons’?

HP: The songs we decided to cover “L’Adorer” by Etienne Daho and “Just Beacuse” by Martin Dupont were really chosen with a lot of care. Both are our favorite songs by these two French artists. But here too, we wanted them not to be just covers, but actual ‘re-creations’ of these two songs. The intention was: if we had created them, personally, what would they sound-like? So we tried to stick to their original tunes, as much as possible, but we also added musical features which were not in the original versions. Well, we assumed it worked pretty well, didn’t it? 😉

Q: Today most of the artists are releasing new work at regular basis while Happiness Project is the entire contrary. How comes and what are you doing in between 2 productions?

HP: We have been building up our musical world with accuracy and precision. In a sense, we are ‘slow music makers’. We do spend a lot of time thinking about each instrument (even if they directly derive from keyboards, except for the bass-guitar and some of the drums, performed by Christelle) and how we can make them all coincide with our lyrics.

Moreover, we live far from each other and the time dedicated to music is always tight, intense and spread out. Also, before releasing a new album we want to be sure that it will meet up with our first intentions. The thing we can assure you about our next album, is that it will come out, within the next two years! The recording hasn’t started yet, but a lot of new materials are ready and we should be starting soon!