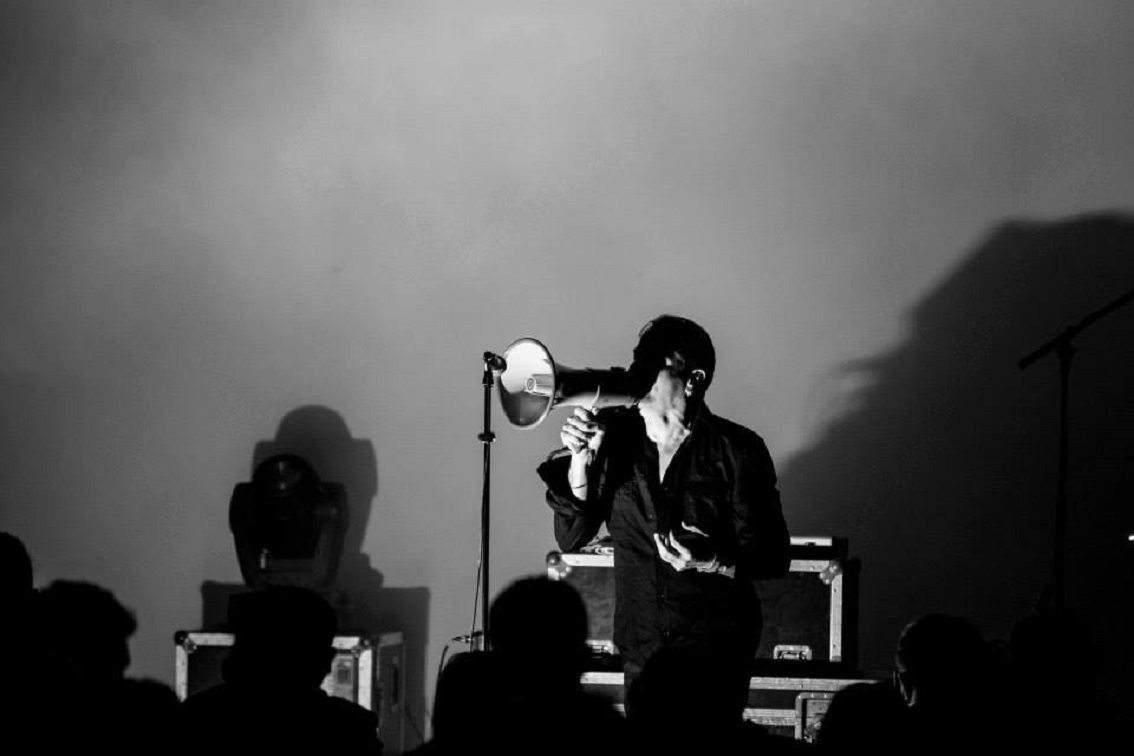 It’s now 27 years ago that Dirk Ivens (the legendary singer of The Klinik) took the world by surprise unleashing the self-titled debut album “DIVE”. The sound revealed a heavy, industrial and unpolished production mixed with  charismatic vocals. This work was the debut of a successful career featuring numerous great albums and essential songs. The music remained dark and industrial, but still featuring electronic treatments. But after the “Behind The Sun”-album (2004) the fans had to wait for 13 years to get new studio material. “Underneath” has been released on Out Of Line and is featuring good-old guest contributor Ivan Iusco (Nightmare Lodge and owner of Minus Habens Records) and Rafael M. Espinosa (Geistform) who already collaborated on “Behind The Sun”.

You can order the latest Dive releases right here on vinyl.

Q: Did you ever thought to come back with a new Dive-album and what was the ‘click’ to start working again on new stuff?

Dirk: . After the definitive chapter to stop The Klinik from my side and the decision to take a long break with Absolute Body Control after the intensive touring, I suddenly realized I had all the time of the world to work in all quietness and peace on a new DIVE album. People asked me for years about new material and I realized it was more than a decade ago since the last album “Behind The Sun”.

Q: What kind of album did you’d in mind (sound- & lyrical wise) when starting the composition of “Underneath”?

Dirk: The ingredients are always the same; dark atmospheric electronics with a haunting voice. Of course there was a lot happening in the world during the last decade. We got confronted with terrorism, which is heavy cutting in the minds of Western people. The world will never be the same as we knew it and I try to capture that image and feelings also in my lyrics.

Q: You asked Ivan Iusco and Rafael M. Espinosa to help a hand. What’s the real impact of both musicians on “Underneath”, which according to me became your most accomplished album ever?

Dirk: As a non-musician I like to work together with other people otherwise every album would sound like the first DIVE record. With Ivan I used to work a lot in the past and with Rafael I collaborated on the last one. This time I asked them both to send music in the style that would fit in the DIVE concept, we discussed about the tracks and made changes where needed, I wrote the lyrics and did the singing. Beside that I also composed a few tracks and this way of working is perfect because this brings variety in sound and structures and keeps it very interesting. On stage DIVE is and will always be a one man project, but on recordings I always worked together with others.

Q: “Underneath” also sounds as a refreshing work and a kind of antidote to all dark-electro and industrial-like bands which all sound pretty similar to each other. What’s your perception of the ‘scene’ today?

Dirk: I don’t listen that much to other electronic bands because there is not much development in that genre, everything has been already done thousands times before. Originality is the keyword, bands like Twice A Man or Portion Control are still making excellent albums, but most of the younger generation sounds like a copy of Nitzer Ebb or DAF, really not my thing. For the “Underneath” album I went to a factory and recorded the banging noise on my discman, just like during the old days. So, be creative instead of using all the same sounds.

Q: I noticed there’re 27 (!) years between your self-titled debut-album and “Underneath”. How would you analyze the evolution of Dive throughout the years and what does it mean to you as an artist/performer?

Dirk: The very first DIVE gig was indeed in 1990, it’s unbelievable how time runs fast. For me music is the red wire in life, I feel like a fortunate person who could do musically what I wanted to do with all of my projects. I have seen a lot of technologic changes, from recording on two track tape desks to digital with all formats in between. The world changed and so do I, my wish is to continue another 3 years and celebrate 30 years of DIVE on stage, a nice way to end this story, right?