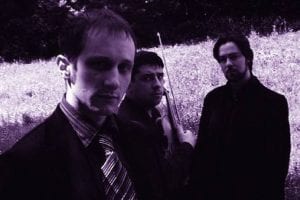 Set up in the late 90s, Ashram released their official- and self-titled debut album in 2002 on Prikosnovénie (France). The second full length “Shining Silver Skies” got released in 2006 on Equilibrium Music (Portugal). The Italian’s neo-classic approach filled with grace and reverie brought them to perform on very different places and countries all over the globe. It took Ashram eleven years to unleash a new opus, entitled “Human And Divine”. They self-released the album in 2017 while Dark Vinyl (Germany) has re-released “Human And Divine” this year. The new songs composed by Alfredo Lotarnoberti, Luigi Rubino and Sergio Panarella stand for artistic grace and sensibility. I’d a short chat with the band.

Q: “Human And Divine” is your third album in more than 20 years and the first ‘new’ one since “Shining Silver Skies” (2006). How come you’re not more prolific while you still moved on playing live performances?

Ashram: Our lives have changed a lot over the last 10 years. We have families and children and this has limited the quantity of time we can devote to music. But somehow, in spite of all and even mysteriously, we managed to release our new album while playing live abroad, from the Azores to China.

Q: I noticed you already played several tours in China! How did you get in touch with the Chinese scene and what did you keep in mind from these experiences, the audience… ?

Ashram: We still don’t know how it happened, our music was mysteriously and amazingly appreciated in China, where we have always found a warm and unexpectedly large audience. In our latest tour there we played ten concerts in front of a total of 5000 people, and what impressed us was that many of those were teenagers.

Q: When did the writing of “Human And Divine” start and tell us a bit more about your way of composing songs, the arrangements and the production?

Ashram: It started 5 years ago. Music is born just like the sun is born, following its nature.

Q: What have been the lyrical influences for this album and what does the title of the album stand for?

Ashram: A positive spiritual attitude results in a powerful energy that connects human and divine, or simply opens your mind to horizons beyond life. This can happen spontaneously, like one flow leading to a love supreme, as in the wonderful album by John Coltrane. Each culture has its reference figure, and mine is Jesus.

Q: Another noticeable fact in Ashram’s career is that one of your songs has been chosen as soundtrack for a WWF video campaign. I can imagine that it must have been something really special, but how did it happen and do you feel involved with WWF and all they’re doing?

Ashram: WWF simply chose one of our songs, and we have been happy to collaborate with them in that environmental campaign.

Q: Alfredo and Luigi, you both are still involved with Corde Oblique. This band is much more prolific when it comes to release music, but what makes the difference for you between both bands and is there a kind of hierarchy between the bands you’re involved with?

Ashram: Corde Oblique is Riccardo Prencipe’s brainchild, who’s quite prolific and active in the music scene. Both of us are more like guest musicians, while as for Ashram we fully express the different parts of our soul, which remains very harmonious with the music.