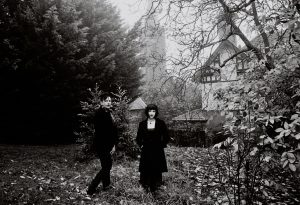 Australian duo Kylie (vocals) and Amps (instruments, programming) were previously involved in Ostia. They next moved on with Friends Of Alice And Ivy. This new band deals with multiple influences such as ethereal, neo-classic, experimental, electronics ao. The music reflects a very own approach resulting in artistic productions. They recently self-released a kind of mini-album entitled “The Last Days Of Fenwyck” confirming their great talent.

Q: Friends Of Alice Ivy is already active for a couple of years now and has been set up after your involvement with Ostia, right? How did you come to set up this new project and what have been the main purposes?

Amps: Yes, that’s right. We have actually been working as Friends Of Alice Ivy for a good ten years now (time flies!). We started working on Friends Of Alice Ivy before Ostia’s last EP (cf. “Between Two Cities” in 2007). It really came about because we felt that Ostia had really run its course and we knew that we still wanted to make music in a slightly different format. Ostia was very much guitar-driven and we wanted to experiment with a more neo-classical sound and use more string-led instrumentation such as harps and cellos etc.

Q: What is the name of the band all about and whatʼs the possible link with the kind of music youʼre dealing with?

Kylie:  The name ‘Friends Of Alice Ivy’ is completely made-up. I love the name ‘Alice’ and I saw it once written with ivy entwined between the lettering… it made think of the name ‘Alice Ivy’ and I simply and quite unconsciously added the ‘Friends Of’. The name does link with the music beautifully, I think the imaginary ‘Alice Ivy’ is as whimsical, mysterious and other-worldly as the music that accompanies it.

Q: Referring to the music and the ‘soundʼ properly speaking, youʼre clearly experimenting with multiple influences creating a very own style. Tell us a bit more about these influences and potential sources of inspiration?

Kylie: It’s very strange, I don’t think our influences are particularly present or explicit in our sound. A lot of writers and reviewers etc compare us to Dead Can Dance and that sort of thing; and whilst they have been hugely influential (and we love what they do) we have really been more influenced by weird sixties and seventies English folk music, classical music, psychedelia and a lot of post-punk stuff like early Cure and the Banshees.

Q: When listening to your music I get the impression to hear artists who really care about ‘artistic creationʼ and whoʼre in search of a very own sound identity, kind of sound DNA! What does music mean to you and whatʼs your perception about ‘creationʼ?

Amps: I am really pleased to hear you say that because we really do labour over our music and it is very carefully crafted. We do try to completely eschew ‘influences’… it sounds a bit pretentious to say this, but we really don’t consider influences when we create our music. We would clearly be lying if we said we were not influenced at all… and clearly everyone is influenced by something… but I do think that Friends Of Alice Ivy’s music comes from the heart. We’re not really ‘musicians’ in a trained sense and so everything we do has a visceral and immediate impetus or origin… we operate very much on instinct when it comes to our music. Even though it is carefully crafted, we don’t really consider anything but the sound and the emotional response we get from creating the songs. If other people enjoy it too, that is a wonderful thing… but we’re really just creating a lot of it purely on instinct.

Kylie: I agree with Amps that our music does come from the heart. One of my most favourite and inspiring artists is William Morris and he once quoted ‘My work is the embodiment of dreams in one form or another’ and I think this is simply just perfect for what we do with our music. Whilst we adore and love exploring new music, stories, art, nature and other lovely things, when we song-craft, the music created is merely a response, a emotional reaction to those things, not an attempt to emulate or sound like someone else.

Q: “The Last Days Of Fenwyck” is your first new work since your debut album “The Golden Cage And Its Mirrored Maze” (2014). What do you keep in mind from the composing/recording process and what does this new album mean to you?

Kylie: As time progresses, we are finding that we are having a very strange relationship with the “Fenwyck” album.  We love it and we worked incredibly hard to bring it to life, but for some reason, it seemed to come together in a difficult time for us both personally. It doesn’t feel ‘Friends Of Alice Ivy’ enough for us in hindsight. There is something quite tense and fraught about it. The subject matter is quite dark and to me it sounds somewhat anxious and strained. We are working very hard on a new album at the moment and we would really like to reintroduce some of the whimsy and naivety of our earlier work, including “The Golden Cage”. It’s strange for us to follow up an album so quickly, but we feel very passionate about returning to our ‘roots’ and we hope to have a new album ready for release in late European Summer/early Autumn 2018.

Q: Internet, social media etc are connecting people with each other and yet I think itʼs not that easy for an Australian artist to reach other continents and foreign music scenes. What are you very own experiences about this item?

Amps: Yes, I would agree that it is very difficult. Firstly we are just so far away from Europe, and our audience is very much a European one. I would conservatively estimate that around 80% of our sales are to Europeans, and we are forever responding to lovely emails from people in Europe about when and if we will come to Europe to play shows. It’s also difficult because Australian audiences find it very difficult to understand our music… it’s not that they are particularly conservative, but the spectrum of live music performed here is just not as broad as it is in Europe. The internet and social media is really a double-edged sword for us… on the one hand it means that smaller bands like us can reach audiences on the other side of the world without the need to tour… but on the flip-side, it means that the volume of music that seeps out there is incredibly large, so it makes it hard to stand out. Then there are the obvious commercial issues with music being incredibly difficult to monetise… and so this makes it somewhat hard to plan for your next work as you’re never sure if you can afford to keep recording new music! I am glad that we have managed to find appreciative ears despite this; and I am always very grateful to journalists and writers who are prepared to take a risk and write about bands who are never going to be as big as U2…ha ha!