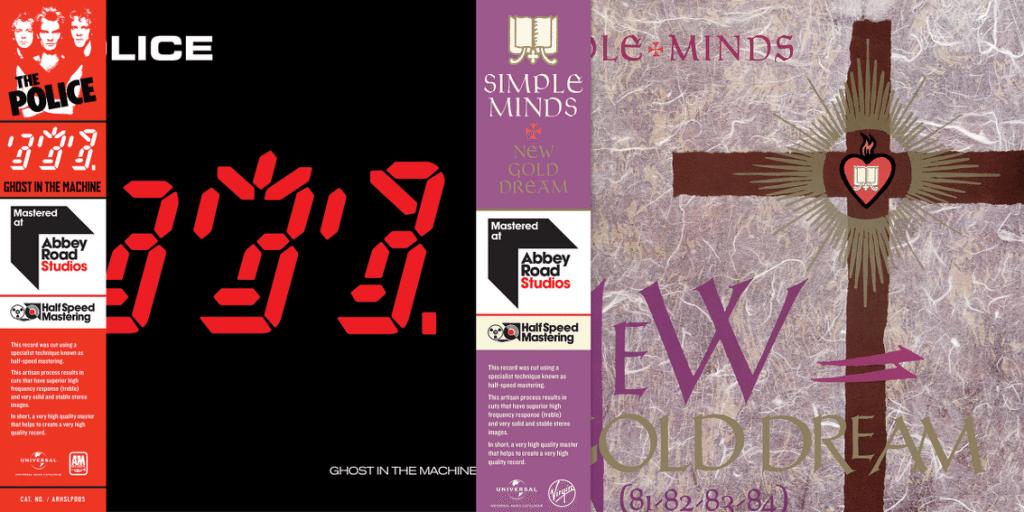 Fresh news from The Police and Simple Minds front. A limited edition batch of The Police’s “Ghost in the Machine” and Simple Minds’ “New Gold Dream” vinyl has been mastered at half speed at Abbey Road Studios. Cut from a high-res digital transfer from the best-known analogue source in existence of the albums, the process uses custom-built equipment allowing for twice the mastering time, producing the highest quality audio ever.

Each pressing comes in deluxe packaging with an ‘obi strip’ and a certificate of authenticity from Abbey Road. “Ghost in the Machine” was originally released in October 1981 and was the fourth studio album by The Police. Released in 1982 “New Gold Dream” was the 5th album by the Caledonian combo Simple Minds.

In case you don’t know an obi strip, an obi strip is a piece of paper wrapped around the spine of Japanese CDs, DVDs, movies, or books sometimes referred to as a “spine card”.

Regarding half-speed mastering, it’s is an elaborate process whereby the source is played back at half its normal speed and the turntable on the disc cutting lathe is running at 16 2/3 R.P.M. Because both the source and the cut were running at half their ‘normal’ speeds everything plays back at the right speed when the record is played at home.

The advantages of half-speed mastering resides in the fact that a vinyl is an analogue sound carrier. Says Miles Showell (mastering engineer at Abbey Road): “Therefore the size and shape of the groove carrying the music is directly related to whatever the music is doing at any particular point. By reducing the speed by a factor of two the recording stylus has twice as long to carve the intricate groove into the master lacquer. Also, any difficult to cut high-frequency information becomes fairly easy to cut mid-range. The result is a record that is capable of extremely clean and un-forced high-frequency response as well as a detailed and solid stereo image.”

There are lower also a few disadvantages, 2 to be precise says Showell: “(…) Having to listen to music at half-speed for hour after hour can be a little difficult at least until I get to hear back the resulting cut when it all becomes worthwhile. The other dis-advantage is an inability to do any de-essing. De-essing is a form of processing the signal whereby the “sss” and “t” sounds from the vocalist are controlled in order to avoid sibilance and distortion on playback. None of the tools I would ordinarily employ on a real-time cut work at half speed as the frequencies are wrong so the offending “sss” does not trigger the limiter and everything is moving so slowly there is no acceleration as such for the de-esser to look out for. This has always been the Achilles heel of half-speed cutting until now (but) I can, by clever editing, target just the offending “sss” and leave intact the rest of the audio.”

You can find more albums mastered this way in the Abbey Road online store.