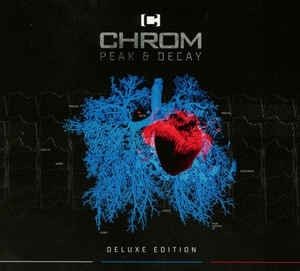 Background/Info: Christian Marquis and Thomas Winters set up Chrom in 2007 and are now unleashing their 3rd full length album. It took them 4 years to strike back with a new studio album although they released a noticeable EP (cf. “Regret & Testify”) in 2014.

But next to this familiar element Chrom injects an extra boost to their work by using heavy dance kicks and aggressive electro sequences. They really worked hard on some of their sound treatments to get some cool and creative sounds. I even noticed a few kinds of industrial electro sounds, which makes it all a bit naughty and especially aggressive.

Next to some irresistible dance floor cuts the work also features a few softer and evasive tracks.

+ + + : Chrom remains a warrant for alluring electro-body-pop music. This is an imaginary hybrid between VNV Nation and Mesh plus some extra boost of EBM on top. Chrom has never disappointed me and this new work already features a few outstanding cuts. I especially like the rawer electro treatments. The familiar EP title song “Regret & Testify” remains a real smasher.

– – – : Some of the ‘softer’ cuts are not exactly adding a bonus to the album, but just a kind of break. The best side of this band clearly remains their feeling to compose great and melodic electro-pop music.

Conclusion: In time where some bands belief again in future-pop, Chrom definitely reveals the right way to follow. They deal with a more contemporary format of future-pop music, which is definitely harder than the sound of the pioneers, but still very catchy.