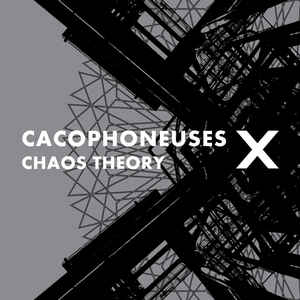 Background/Info: Four years have passed since the debut album “The Myth Of Lorelei” from the French female duo Cacophoneuses. Sandra and Joséphine are back again on Hands unleashing 10 new industrial assaults.

Content: The main basis of those ladies sound is clearly driven by hard power-noise music. That’s already what we could experience at their debut work. The sound is now also featuring a few techno influences, getting the production more trance-like. I experienced this work as more varied. Next to ‘classical’ hard and distorted power-noise cuts Cacophoneuses has created a wider sonic horizon where it feels good to dance…

+ + + : “Chaos Theory” moves on there where “The Myth Of Lorelei” stopped. It means that this album goes a step further, exploring new ideas while getting the sound more diversified. The main parts remain however totally addicted to power-noise. Those girls are composing music with a huge dose of testosterone. I especially like the evolution into trance/rave fields.

– – – : I noticed a few details in the global production (like a fade out on one of the tracks), which are a little bit amateuristic, but Cacophoneuses is clearly not into subtle treatments, but into hard power!

Conclusion: I thought testosterone was typically male-like, but those ladies are the exception to the rule. They’re driven you mad with their “Chaos Theory” and I think they’ll make a lot of guys jealous.