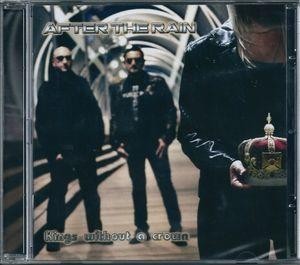 Background/Info: This band is based in Madrid and was set up as a duo in 2012. They already self-released two previous productions, but this new work can be seen as an official debut album. The album is also available in a ‘deluxe’ edition which includes a T-shirt and sun glasses along with the CD.

Content: I discovered a real mature and elaborate song writing, which is carried by solid bass lines, cool sound treatments, a catchy, poppy touch and a few guitar passages. Most of the songs are pretty danceable and feature nice melodic leads.

After The Rain clearly sounds inspired by some famous bands in the genre and there clearly is a Depeche Mode flavor hanging over some songs while Erasure is another band that comes to mind. There also is a song taking off with the “Da Da Da” gimmick of Trio, which is another wink to the 80s electro-pop music.

Some songs are a not as hard and are inspired by some body-pop elements while other passages are a little bit into technoid ideas.

The songs were sung in English, which seems to be one of the main evolutions compared to the earlier work.

+ + + : After The Rain stands for cool and achieved electro-pop music, which is based upon a real solid sound production.

– – – : One of the main elements –and yet that important when it comes to make synth-pop music, which can’t totally convince me is the vocals. The singer’s voice is missing some conviction and passion although some songs at the end of the album are more convincing.

Conclusion: After The Rain is not adding anything new to synth-pop music, but the music is well-crafted and showing a strong potential. I think they really have to focus on the vocal production for the next work.

Best songs: “Invincible – You Are The One”, “Mirrored Eyes”, “Wir Sind After The Rain”

Tags: After The Rain