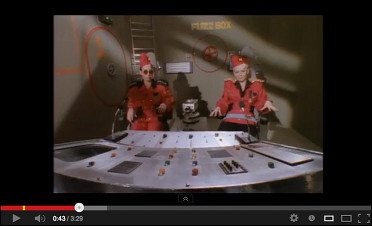 This 80sObscurities was founded by DJ Rexx Arkana to showcase old, often unknown or forgotten acts and tracks from the decade when electronic music was truly the new wave. Rexx Arkana has been a club/radio DJ and promoter since the mid-80s and headlined festivals on several continents and currently holds a residency at DEFCON, NYC’s current longest-running weekly scene party. He is also the founder and lyricist of Brudershaft and one half of harsh electro act FGFC820.
This sunny Tuesday at 80sObscurities, We’ve Got A Fuzzbox and We’re Gonna Use It. Actually, I don’t really have a fuzzbox, not in the common sense of the word and certainly not in the euphemistic one. The double-entendre worked well as a name for the Birmingham girl band of the mid-80s however, and – like Hayzi Fantaysee’s image – definitely called attention to the group. Formed in 1985, Fuzzbox (to which their name was eventually shortened officially) was an all-girl quartet consisting of vocalist Vix (aka Vickie Perks) and multi-instrumentalists Magz (Maggie Dunne), Jo Dunne (R.I.P.) and Tina O’Neill.
The group’s first single was 1986’s “XX Sex” b/w “Rules And Regulations”, which just missed the UK Top 40 and settled into the indie chart for nearly half a year. From this followed their debut album, “Bostin’ Steve Austin” (re-titled “We’ve Got A Fuzzbox and We’re Gonna Use It” by Geffen Records for its U.S. release), from which came the band’s first Top 40 hit, “Love Is The Slug.” By the time the band released their second (and last) album, 1989’s “Big Bang!”, they’d reformatted from brash, fuzzy punk to slick, danceable pop. While this caught their early supporters off guard, it did – predictably – lead to their greatest chart successes.
Today’s touted tune, “International Rescue,” might have been more glitter pop than gutter punk, but it nearly broke the band into the Top 10 (just missing at #11). Other singles from the album registered as well, with “Pink Sunshine” peaking at #14, “Self!” at #24 and “Walking On Thin Ice” at #76. The foursome split in 1990 while working on material for a new album, which was scrapped as a result. However, the band did play together again in their native Birmingham in 2008, the experience of which led to a formal reunion in 2010 (minus drummer O’Neill). A two week tour ensued, including a headlining gig at our scene’s famous Whitby Gothic Weekend. Sadly, the project disbanded again shortly thereafter and guitarist Jo Dunne passed away in October of last year.
That said, those who are interested can still get their fill of Fuzzbox, as earlier this year Cherry Red Records re-issued enhanced editions of both “Austin” and “Big Bang!”