We’re sure you’ve probably heard of it before. Sweep picking is a classic guitar technique used by many guitarists, after all. But why do a lot of people still have a hard time getting it down?

What is Sweep Picking?

Sweep picking is a guitar technique popularized by Yngwie Malmsteen in the 1980’s that was used to play fast runs that go across lots of strings at once. This technique involves making a “sweeping” motion with your pick at the same time your fretting hand plays a series of notes on the fret board, one by one.

“Sweeping” with your pick means that you do three or more downstrokes or upstrokes in a row quickly, on different strings, without making it sound like a strummed cord.

The fretting hand is what’s responsible for separating the notes so that only one note is heard at each strum. This is achieved by muting the five strings that you are not using with any free fretting-finger you have at your disposal.

The road to mastering sweep picking is paved with hard work and a great amount of picking exercises. To help you get started, we’ve come up with this list of exercises you can do even as a beginner.

Majority of sweep picking licks utilize arpeggios (also referred to as ‘broken chords’). Although arpeggios are often played using chord shapes, most guitarists use alternative shapes for the purpose of sweeping. Here’s an example:

Have a go at playing the arpeggio forwards and backwards a couple of times before moving on to the next exercise. Make sure your fretting fingers are moving ONE BY ONE.

Here’s an example of a simple sweep picking pattern to help you get started with those downstrokes.

NOTE: Even though there are multiple fret 3s written in a row, try not to let all of them ring out like you would a broken chord. Try fretting the strings in time with your sweeping pick.This will give you a much more controlled sound.

The exercise is a three-string fragment of a note, much like what Yngwie Malmsteen would play.

You can warm up your picking hand by holding down the chord shapes and practicing moving your pick through the strings. Concentrate on controlling your hand so that it moves in smooth, relaxed up and down strokes. Try playing the notes in even triplets, or three notes per beat. Use a metronome if you’re only beginning to read notes.

Once you feel comfortable enough with the exercise, start following the beat of the pick with your fretting fingers.

Play the first three ascending notes with your first, second, and third fingers, and do the same with the following descending notes. Make sure to only hold down one finger at a time to keep the notes separated when you play.

This exercise is similar to the three-note sweep, except they have two extra notes on the fourth and fifth strings, played by your first and third fingers.

This time you will have 5 notes per beat, which might take a little getting used to, especially if you’re a beginner. But all should naturally fall into place if you concentrate on making the lowest and highest notes fall exactly on the down beats.

Below is a n example of a G major arpeggio. As you can see, it takes many of its notes from  the A major barre chord. 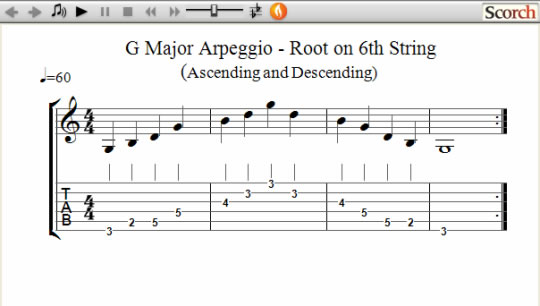 Now, try playing it as sextuplets, then transpose it two frets higher.

You’ll be playing an A major arpeggio.

This, on the other hand, is an example of an A minor arpeggio.

Try moving this one two frets up. You’ll find yourself playing a B minor arpeggio.

Any guitarist can move these major and minor shapes anywhere on the fretboard to change the key they are playing and experiment with triplets, semiquavers, and sextuplets.

It’s difficult to stay motivated when we notice ourselves having a hard time with something that we’ve only started doing. We encourage you to stick with your fretting exercises for a little longer. Give it a week or two to grow on you, before thinking about throwing in the towel.

One of the best ways to stay motivated is to keep a healthy and fit body. When you’re at top condition, you have more confidence and therefore more willpower to keep pushing through the challenges of your practice.

Infusing workouts with effective supplements that boost your performance is a great way to make the most out of your sessions. If you’re not sure which supplements you should get, here is a detailed review on C4 pre-workout supplements, an advanced pre-workout formula for anyone seeking increased energy and focus.

Sweep picking is a tricky technique to nail down, but once you’ve gotten it, you’ll be able to rock those guitar solos time and time again. Just remember to stay consistent with your practices and make time for learning new patterns. Embodying the value of life-learning can help you discover new techniques that can improve your playing and more.