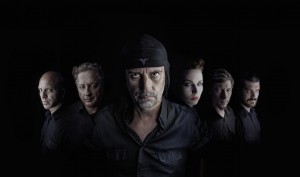 Laibach’s recent “Spectre” Digital Deluxe Album was released in April via iTunes (direct link to the product) including the original album plus bonus tracks and “Spectremix”, an album of remixes. Out now is the brand new video for “See That My Grave Is Kept Clean”, taken from “Spectre”.

Laibach embarks on a North American tour, their first in nearly 10 years, on Monday, May 11th. The dates start in Washington, DC and continue into June. You can buy your Washington DC, New York, Toronto, Indianapolis, Ohama, Portland and San Francisco tickets right here.

In related news, the limited edition vinyl picture disc of “Neu Konservatiw” is now close to being sold out. There are a few copies remaining, get yours here.

Since you’re here … … we have a small favour to ask. More people are reading Side-Line Magazine than ever but advertising revenues across the media are falling fast. And unlike many news organisations, we haven’t put up a paywall – we want to keep our journalism as open as we can. So you can see why we need to ask for your help. Side-Line’s independent journalism takes a lot of time, money and hard work to produce. But we do it because we want to push the artists we like and who are equally fighting to survive. If everyone who reads our reporting, who likes it, helps fund it, our future would be much more secure. For as little as 5 US$, you can support Side-Line Magazine – and it only takes a minute. Thank you. The donations are safely powered by Paypal.
Tags: Laibach