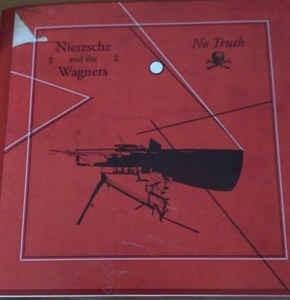 Background/Info: Hailing from Leipzig, Nietzsche And The Wagners has been active for a couple of years now and has finally achieved their official debut album featuring 7 songs. If you’re a bit familiar with this duo you maybe know their previously self-released digital single “The Forlorn Hope”. Both cuts on this single have been featured on the album as well.

Content: From the very first notes on you get the impression to get back in time and awakening somewhere in the midst of the 80s. The songs are driven by pure post-punk influences and other cold-wave elements. Some guitar parts sound a bit chaotic-like while the classical low resonating bass lines are once again pretty similar to the 80s dark music spirit.

You’ll also notice some electronic arrangements, which now and then inject a wafting sensation. The vocals are quite passionate and sometimes a bit into an exclamation style.

+ + + : The main strength of this formation is the good-old post-punk format carried by heavy guitar play and this typical cold atmosphere reminding to the 80s. A few songs remind me to Red Zebra.

– – – : “No Truth” has a real strong déjà-vu effect without real highlights. It’s not bad, but definitely not groundbreaking;

Conclusion: Nietzsche And The Wagners is a new band inspired by an old sound formula. The post-punk format makes sense, but I’m missing a climax.

Tags: leipzig, Nietzsche And The Wagners