A new study on the future of music sales has been released via Ovum, a technology research and advisory firm. According to Ovum spending on digital formats and services will overtake physical formats this year and go on to account for almost three-quarters of all sales in just six years. That makes sense and goes hand in hand with our own earlier findings.

According to Ovum’s latest research, the retail value of all recorded music sales is expected to contract this year and next before edging up 0.1% in 2017. Simon Dyson, author of the report says: “2015 is a big year for the music industry with global retail sales of recorded music crossing the digital tipping point.” Dyson added that “for the first time, digital spending will top physical sales, amounting to US$11.7bn this year (compared with US$10.3bn for physical) and reach US$15.7bn in 2020.” Music subscriptions will lead the digital charge and will dominate retail spending for the foreseeable future. Also nothing new.

As expected, but Ovum presents it as a new finding, there will be no anticipated growth in overall consumer spending on recorded music (but no significant drop either). Ovum didn’t need to do a study for this because the main reason for this status quo is the shift from the (more expensive) ownership model to the (cheaper) access model (especially considering the fact that for instance CDs and downloads have a higher production & selling price). 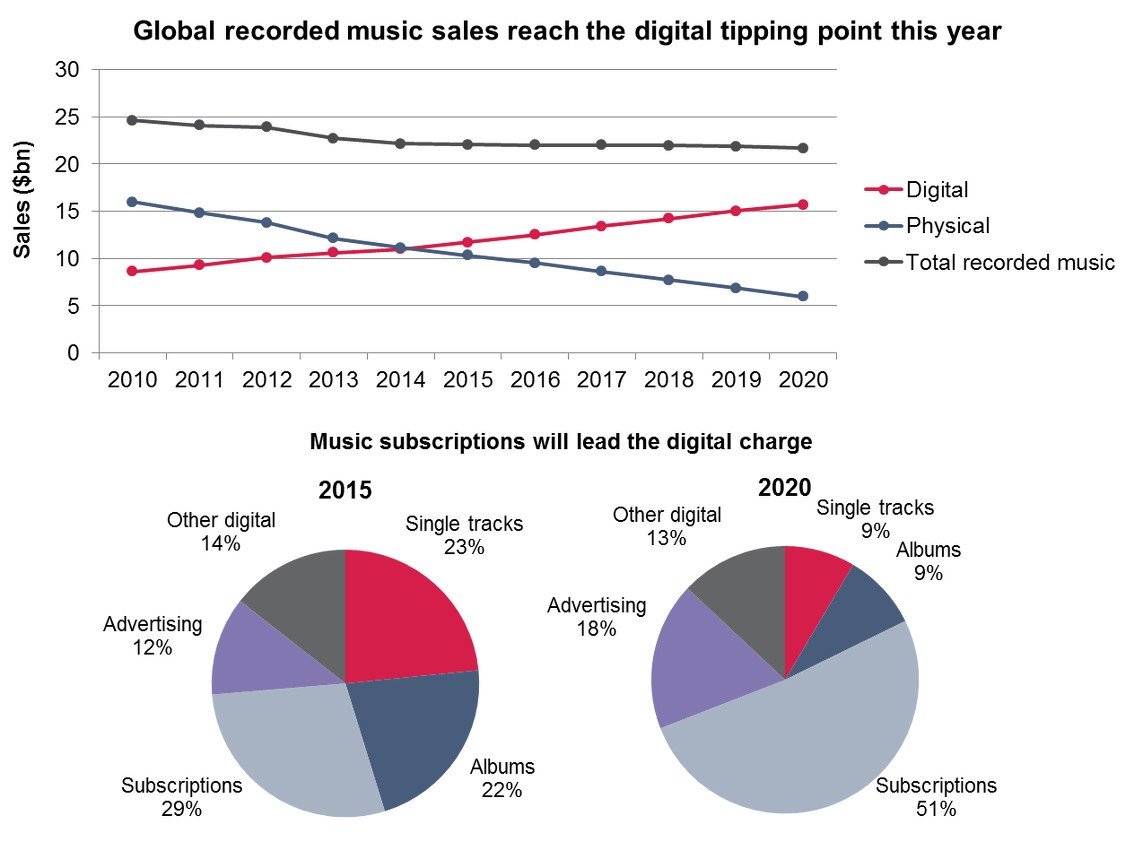 Ovum also claims that marketing expenses will drop. That might be right if all labels have an Adele contracted, but promo wise the costs have not really gone down at all for indie labels. On the contrary, a lot more effort (time is money) is now needed to reach the same amount of people in the past due to the continuing massive decline in reach from print magazines and the increasing effort needed to reach (new) customers. Especially labels which don’t have a decent mail database and which have not been doing B2C see a huge problem in connecting with their possible fanbase.

The Ovum study clearly forgets how promotion on streaming platforms like Spotify works (and all those working in the field know it’s a pretty tough nut to crack) and unless that these service launch decent advertising platforms, things won’t change anytime soon. Add to that that Ovum does not take in account the rising cost to reach music fans where they are today: Facebook. We all know that Facebook’s reach is diminishing by the day unless you pay for it. That model does not seem to change in the near future and will become problematic for many labels due to a continuous recurring costs to outsource promotion per release, unless they have a good B2C relationship.

Ovum ends its study by saying that physical formats – and to a lesser extent single tracks and digital albums – still account for a sizable share of music retail sales. Nevertheless the streaming sector will be hard pushed to make up for the forecast declines in the buy-to-own formats.

In short, nothing which we didn’t know already. The only new thing we see in this report is that many of this studies are done by companies with a serious lack of marketing / promotion background of the indie scene, which in itself has completely different dynamics compared to mainstream labels (including big indies like Pias, etc).