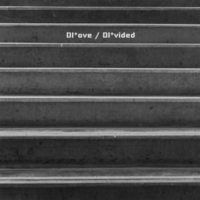 Background/Info:  DI⁺ove is a Belgian formation set up by Eric ‘Manchiniste’ who’s a guy I remember from his early project Escape Industry. He later on got involved in Evoid and finally set up DI⁺ove. A debut album “DI⁺ode” was released in 2013 on EK Product. Manchiniste and the new singer Sacha Delone have accomplished a new album featuring 11 tracks.

Content: DI⁺ove clearly creates some distance with cliché EBM formats. The sound is inspired by EBM and mixed with electro-pop elements. The global sound production is cold and dark. There’s always a solid EBM basis, but merged with other influences. It’s not always into body-pop, but it does reveal minimal EBM treatments or industrial sound manipulations and even influences like electroclash and new-beat can be noticed.

“DI⁺vided” is an extremely varied composition and yet pretty compact. The new singer is not what I should call a charismatic vocalist, but his way of singing totally fits with the sound. There also is a noticeable diversity in the vocals’ production and even the language. Most of the songs have been sung in English, but you also will notice several French sung pieces.

+ + + : “DI⁺vided” is a versatile work, but a fascinating experience. It all sounds like the band feels comfortable experimenting with all these influences. I noticed great body-pop parts, but also some minimal-driven songs with some Kraftwerk-elements on top and other cuts carried by some electroclash spirit (featuring cool female backing vocals) and last, but not least a kind of instrumental new-beat final cut.

DI⁺ove has accomplished a fully original piece of work while it also reveals a noticeable progression compared with the debut-album. There’re a few brilliant pieces on this album and I especially want to mention “Good Luck!”, which even reminds me a bit of Covenant.

– – – : The diversity of the work might be a point of discussion for some people. I think it makes the work accessible for a wider audience although I’m not that fond of a few ‘softer’ cuts, which are more like songs just to listen to.

Conclusion: DI⁺ove has released a tour de force; this album mixes originality with efficiency. This is great music to dance to, revealing a mature, elaborated and accomplished work.