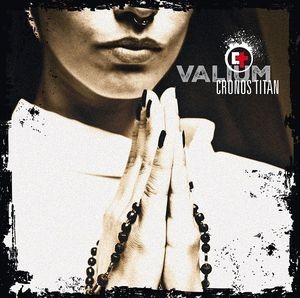 Content: Cronos Titan was set up in the midst of the 90s right after Per Aksel Lundgreen departure from Apoptygma Berzerk. Together with Pr3ben Bjønnes he set up Cronos Titan, which got a wide interest from the underground scene.

“Valium” is a little ‘treasure’ that was lost since 1997! It was meant to become the 2nd full length album by the duo, but because of serious studio damage they thought to have lost the original recordings of “Valium.” Per Aksel Lundgreen found the DATs featuring the recordings of this work by surprise and simply decided to master it. So here comes this “Valium”-work 18 years later than originally planned.

The work features 7 songs, simply entitled, “Valium” and numbered from 1 to 7. Cronos Titan always has been a kind of sound chameleon, which liked to move from one genre to another one. You maybe know this band for their EBM-minded material (cf. “Titans Remain”), but the early years were quite different. This work invites the listener to join these elaborate electronic fields, which have been spiced with industrial and ambient influences.

The work remains instrumental and is mainly based upon varied sound manipulations and studio effects. “Valium” is a perfect match between electronics and industrial music and rapidly appears to be a bridge filling the gap between both styles. The sound treatments show the great care but into the creation unique sounds, which often reveal a great vintage touch. Another essential element of the work concerns of the rhythm patterns, where they created a kind of ‘train’-like cadence. It injects a real cool move into the work and I guess it’s not that of a coincidence if my favorite songs are the ones carried by this rhythm cadence.

If you’re afraid that this album is out-of-date I can assure you it still sounds pretty contemporary revealing an interesting approach in the way to compose ‘alternative’ industrial music.