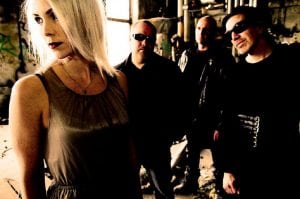 This interview could be entitled ‘from Tolchock 14 towards Tolchock’! Tolchock 14 was set up in 1986 by Swedish duo Christer Lundmark – Jens Persson. They became a renowned EBM formation belonging to the early and successful Swedish EBM. Like it often happens the band split, but resurrected under the Tolchock moniker. The sound became somewhat different, a bit more indie-like. New work got released and especially the last- and self-released studio album “Elements Of Rage“ (2015) took me by surprise. Christer and Jens got joined by Jenny Runa and have now released the album “World Of Tolchock 1997 – 2017”, which is a kind of retrospective from the Tolchock-years. Jens Persson talks about the past, the present and further plans…

Q: The new album “World Of Tolchock 1997 – 2017” is a retrospective of 20 years of Tolchock, but still of the band’s second period in history. What have been the main facts from this period and the main differences with the early period as Tolchock 14?

Jens: When we in 1998 released our debut album after a 10 year period of Tolchock 14, and some cassette-releases, we realized that we have developed something new. From being a two person act going wild in the studio, we did some radical changes. First of all we became a trio, when Michael came in as a permanent member on guitar. Then we started to look in other directions for inspiration. The live-thing became very important, and we got a lot of inspiration from the industrial scene, like NIN, KMFDM etc. We also started to integrate techno-elements into the sound, still with the elements from Tolchock 14, but we wanted to emphasize the difference by changing our name…

Maybe when we look in the rear-view mirror we should have taken a total new name to get rid of all the comparison. When Tolchock 14 was a crazy and limitless playground, TOLCHOCK turned into a more physical machine music industry.

Q: Tolchock makes me think of a band following its instinct; you’re not jumping on fashion trends and aren’t the x-emulation of a bigger band. But what is Tolchock really about and what means music to you?

Jens: TOLCHOCK is psychotherapy for us…ha ha. Its running in our veins! And it’s an important channel to express our self. Maybe we have to produce our songs… to remain sane. The music is obviously a big and important part of our lives. The theme of the songs; the lyrics are also very important.

Q: I consider your latest (and self-released) studio album “Elements Of Rage” (2015) as the most accomplished work you ever did, but which maybe didn’t get the deserved recognition! That must be really frustrating, but how did it really feel for you?

Jens: That was one of the main reasons why we did this compilation. To give our music one more chance… to reach out. When we released “Elements Of Rage” we were seriously quite insecure to how the album would be received. We were overwhelmed by the fantastic reviews and reactions we got on the album.

It was kind of breaking point for us. It was a relief and it felt natural to keep doing our thing. We are really proud of that album. When we started to work with “Elements Of Rage” Jenny also became a permanent member of Tolchock. She makes a big and important difference to the sound.

Q: “World Of Tolchock 1997 – 2017” has been released on Energy Rekords. I guess it must be something special for a Swedish formation to get your album released on this legendary label, but what does a label stands for in times CD sales are going downwards?

Jens: We had a plan to release this retrospective-album… When we contacted Energy about the rights for our older stuff, they asked us to release the album. It was perfect for us… It’s nice to have a record company taking care of the distribution. Energy Rekords is also an important piece of our history. We also planning to release a limited edition on vinyl.

Q: Would you ever consider releasing a ‘best of’ from Tolchock 14, which back in time definitely was one of the most promising and recognized Swedish EBM bands? What does these early years evoke to you?

Jens: It feels kind of exciting thinking about releasing the earlier stuff. Just thinking about Tolchock 14 and our history really brings back some good memories. It would of course be cool to give that forgotten, exclusive and rare material a second chance to… It depends on the interest out there…

Q: If this ‘new’ album is a look back into the past, how do you imagine Tolchock’s future and what might we expect?

Jens: We´re full of expectations! For the first time we are going to produce our music separated. We are splitting our studio in two and we will focus more at the production when we meet. The main reason is that we no longer living in the same city. But we have chosen to see that as a good thing that hopefully will double up our production speed.  Finally we hope that we get the opportunity to do some nice festivals during 2019. So you might expect some new TOLCHOCK-songs and some live shows. We hope so…

Since you’re here … … we have a small favour to ask. More people are reading Side-Line Magazine than ever but advertising revenues across the media are falling fast. And unlike many news organisations, we haven’t put up a paywall – we want to keep our journalism as open as we can. So you can see why we need to ask for your help. Side-Line’s independent journalism takes a lot of time, money and hard work to produce. But we do it because we want to push the artists we like and who are equally fighting to survive. If everyone who reads our reporting, who likes it, helps fund it, our future would be much more secure. For as little as 5 US$, you can support Side-Line Magazine – and it only takes a minute. Thank you. The donations are safely powered by Paypal.
Tags: EBM, KMFDM, NIN, Tolchock